Literally Everyone Tells Parents How Hard It Is

A recent trend in online mom confessionals is the common opening line: “No one tells you how hard [it*] is going to be.”

The truth is that everyone tells us how hard [it*] is going to be, including conception, pregnancy, labor, breastfeeding, sleep training and essentially anything that falls within the first 90 days of new motherhood and continuing beyond.

Seasoned parents love to tell new moms and dads that it gets better after the first three months. It’s a much-appreciated expression of empathy and a glimmer of hope. But well after the sun had set on our own infamous fourth trimester, the voice in my head was constantly lamenting: when will the first three months be over exactly? As Sydney approached five months old, the end of those first-three-months was seemingly nowhere in sight.

As the tyrannical dictator in our home completes her #FourthTrimester, she'll soon be overthrown by the domestic majority. #PostpartumTweets

Spoiler Alert: It does, in fact, get better (not easier, necessarily, but better).

And as it starts to get better, we’re reminded with increasing frequency that we should be relishing the here and the now. You think you’re tired now? It only gets worse once they’re mobile, we’re then told. It’s advice offered by fellow parents with the best of intentions and the innate yearning for moments that are constantly rendered fleeting and precious by Father Time. And as those moments become a fickle combination of better and worse, there is an abundance of resources addressing various challenging parental issues — from fertility to funding college educations and everything in between.

Google any reproductive, birthing or caregiving issue, and there will be someone ready and waiting to impart their research- or experience-based wisdom. After throwing out several sets of crib sheets, friends of ours were grateful for the internet’s effective solution to halting their toddler’s nightly fecal finger-painting projects. Is a milk blister forming on your nipple? Are you uncomfortable with the cry-it-out method? Are you experiencing frightening, intrusive thoughts? Don’t know where to start with potty training? Need an angle for the dreaded question of where babies come from? Why does it seem like my newborn hates me? Just ask The Google and you’ll have an entire world of apps, books, blogs, chat forums and websites at your disposal.

In my second trimester, I googled, "feels like being electrocuted in vagina" and learned about #LightningCrotch …#PregnantTweets

The point is that everyone is telling us how hard it is.

Our own mothers and fathers were among the first to remind us during some tumultuous moment in our upbringing that we weren’t delivered with manuals. Nearly every woman in the United States (if not the Westernized world) has seen Charlotte and Miranda’s barside motherhood confessional in Sex and the City 2, but even 80s’ movies like Mr. Mom existed decades before Bad Moms hit theaters. And, inevitably, there will always be that one snarky friend who can’t wait to tell you that they told you so. As the advent of social media ushered in the digital overshare and our individual platforms broaden our reach, fading were the dark days of the things that 1950s housewives never talked about. Women have slowly been finding their voices; the success of #MeToo is proving that. Without undermining the importance of the Hollywood-birthed activist movement, moms also need a little “me too” support of their own and a lot less “I told you so.”

It’s just that the trials and tribulations of parenthood—and motherhood in particular—rarely resonate until we wake up in the trenches. We either assume the stories have been inadvertently exaggerated or we are internally and blissfully confident that it couldn’t be that bad. Or—through no fault of our own—we simply weren’t drawn to the information because we were quite naturally occupied with our preparental lives. Blog posts about breastfeeding complications were not essential reading for the boardroom.

Or—just as commonly—we have read many of the expert-crafted books and still remain disillusioned by all the ways we still feel unprepared by our parenting predecessors. There is no shortage of what-the-baby-books-don’t-tell-you op-eds and why-didn’t-anyone-ever-tell-me-xyz rants. They’re pounded out in bitter — and often anecdotal — onslaughts or come across as an entitled tirade of all the things the parenting world owed them yet fell short. Ironically, some of those same angry mothers are the ones whose babies frequently sport the infamous “my mom doesn’t want your advice” onesies.

Manson’s philosophy has been my approach to both the parenting books and all of the solicited and unsolicited advice I continue to receive—and gratefully accept—as a new mom (regardless of whether I find it suitable for our situation). It isn’t the world’s job to prepare me to be a parent. All of the things the world failed to tell me are neither the world’s fault nor my own, but I am responsible for figuring it all out. Whether it’s trial-and-error, a library of parenting titles or an endless stream of advice, I have to be open to seeking and, more importantly, receiving the information without negatively perceiving it as a threat to — or criticism of — my own ability as a mother. And some sh!t I’m just going to have to figure out, realize or accept on my own.

Have you ever failed to retell a joke accurately and then shrugged it off with I-guess-you-had-to-be-there? That’s kind of what parenthood is like. You have to get there to truly understand the punchline. It’s human nature to momentarily empathize with a hardship and yet soon move on with very little (if any) enduring traumatic residue. And when a similar trauma eventually enters our own lives with direct force, the resounding impact can potentially deafen our recognition of those who actually did come before us. If this were not one of the many essences of humanity, we would never — for example — hear someone distressfully accuse another of not understanding their heartache. In the aftermath of a break-up, it can feel as though no one could ever have endured such pain before. That’s also what the hardships of parenthood can feel like — especially in our earliest, most isolated moments. Over a year in, I still seek relief and humor from my mama friends because it’s so easy to forget that I am not the only overwhelmed parent in the world.

If the cautionary tales did strike a profound chord without the wisdom of experience as a prerequisite for genuine empathy, there would be far less judgment all around.

Critical non-parents and those raising “easy babies,” alike, would express more tolerance for strong-willed children whether in grocery store or on airport security lines. Expectant, new and seasoned parents would not become competitive when comparing childrearing methods, and unsolicited parental advice would not be perceived as a threat or a criticism simply because it originated from a different school of thought (or just because your mother-in-law said it). In short, we would be more open and willing to observe the diversity of parenting philosophies without judgment — especially those that we have no intention of implementing.

Even when I was pregnant, I may have felt like I was a mother already, and I lovingly honored myself accordingly as I prepared for the actualization. However, the reality is that my baby bump was on autopilot. Of course, I did the things that were expected of me (e.g., eat well, remain physically active within doctor’s orders, refrain from alcohol and various toxins, sleep as often as possible), but my body grew, fed and soothed my unborn child whether I was conscious of it or not. The tumbling fetus and hormonal imbalances may have kept me uncomfortably awake and overheated at night, but my baby bump didn’t cry on airplanes or throw tantrums in restaurants. It didn’t blow out a diaper in the middle of a grocery store with a nearly full shopping cart and no public restroom. I didn’t have to find it a babysitter in order to enjoy legitimate pockets of freedom or repeatedly coax it into a stroller.

I was never a career-driven cynic who doubted mothers when they discussed their challenges. I didn’t internally scoff and snidely wonder how difficult could it possibly be to just stay at home in pajamas all day. When mothers said how hard it was, I believed them. Yet no amount of empathy prepared me for the round-the-clock emotional and physical toil.

Perhaps nothing can truly prepare us for the realities of parenthood, but we have to keep sharing our thoughts, our research and our experiences without alternative agendas.

With even a small reach for perspective, we can stop using the “no one ever talks about [xyz]” mom-confessionals to garner sympathy for our circumstances. Playing the victim or seeking martyrdom in motherhood only serves to inadvertently place blame on the mothers-who-came-before-us for not better prepping us, new mothers, for what was to come (and, apparently, for not writing more thorough parenting books). It can read as an entitled accusation that my new life as a mama would have been dramatically easier if all mothers weren’t pretending like it’s not hard and purposely hiding their truths from me. Both of which might have been true in 1948; neither of which is true sixty years later.

In the midst of the inevitable chaos, we are constantly navigating a sea of propaganda in an information-overloaded society that still finds ways to complain about not having enough information. Fortunately, we can be both open to diverse parenting theories and simultaneously exercise the power of independent thought and freedom of choice as we settle ourselves on our maternal compasses.

An inability to exercise deductive reasoning, combined with confusion and self-doubt, are in the center of the arena of mom-shaming; surrounding the arena are all of the non-parents with strong opinions. The extremists at the far opposite ends of the well-intentioned #BreastIsBest and #FedIsBest organizations are just one example of the many opposing forces in motherhood; it is up to us to seek the balance. Understanding must replace superiority. So, for as much as we put out into the universe, we must also listen without judgment, entitlement or pretense while ultimately deciding for ourselves what is best for our families.

Maybe then we can feel empowered to face the challenges that can only seem all the more isolating when it feels as though we have been intentionally kept in the dark.

This post originally appeared on MOMganized. It has been reprinted with permission. 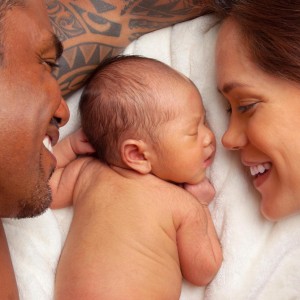 Katie is on hiatus from corporate Manhattan to dedicate some time to motherhood. She is blogging about the sh!t that is helping new parenthood seem less chaotic for her family at Sh!t That Worked for Us and sharing ideas on how to organize all that sh!t at MOMganized. She and her husband, Carlyle, offer no guarantee that the Sh!t That Worked For Us will work for other parents, and any parenting advice offered on STWFU or MOMganized is purely anecdotal.