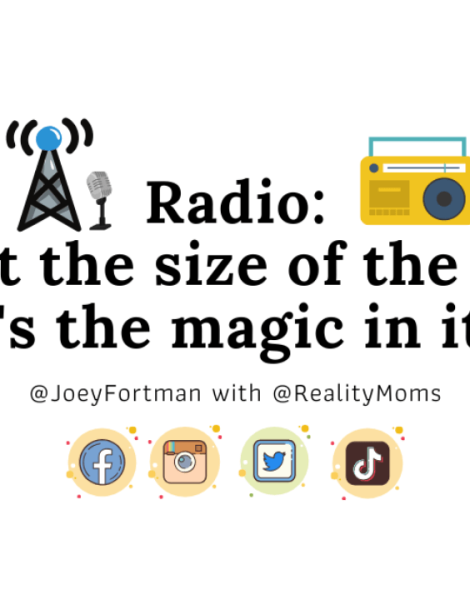 I know we are Reality Moms where we talk about the good, the bad and the funny of motherhood. So why am I writing about radio here? Because this week 1200 families across the country was affected by a giant shift in a medium that believe it or not—I know a lot about.

If that’s not moms faced with reality, I don’t know what is.

You see, I spent decades in traditional media. I started in radio in 1998 in good ‘ole Murray, Kentucky. From there I bounced around to do mornings in Paducah, Kentucky (non-rated market), then Bristol/Kingsport/Johnson City, Tennessee who was market 200 something at the time. I then bolted to market 3 in Chicago before meeting my future husband who drunkenly told me he owned a radio station at a bar I was working at. (Cause let’s face it—radio personalities had to bust butts then to make it in the biz—bartending in my 20s? Winning!) The next day he called me and when I asked what station he “owned” he corrected himself in that he just “worked” at a radio station. Great story, right? I love it. It’s my love story.

Fast forward and just a few months after we got married in 2007, my husband got an offer in Philadelphia to run a live and local sports station. He was working at a network and they ended up dissolving and Philly was his first opportunity to do terrestrial radio. I was hosting mornings in Chicago. It was a dream job. And yes… I walked away from it so he could pursue his. I mean, that’s what wifeys do, right? Well…. keep reading. lol

I did middays at a station within his same cluster (Greater Media at the time) and the day I returned from maternity leave—I was shown the door because they eliminated my position. Terrible right? (And yes. Probably illegal these days. However, he was our bread and butter so why would I ruffle that from my measly on-air gig?)

That’s the reality of my motherhood and 100% when I started on digital.

I was going through postpartum depression at the time and I was dying for an audience to talk to. Not about celebrity boloney but real life stuff. Exactly what my target demographics had been my whole broadcast career. Women 25-54. Heavy on the 25-44 side considering I was sharing my heartache as a new mom dying inside from losing her career in a city with people who were mean as hell. My midwest heart had no clue about the mentality on the east coast and it took me a long time to figure it out. A year after my midday job I was offered the afternoon job at a hot ac station in the market. Same cluster as my husband. His station was an am station and the company flipped them to FM. My signal. I found out I was losing my job (again) from the receptionist who shared a story about the flip leaked by ESPN on AllAccess, a big radio publication. Yes. My husband took my job and it was torture on my already vulnerable self. Needless to say I was the talk of the market at that time. And boy did it hurt inside.

Well…. let’s just say what happened next became a giant shift not only in me and my family—but in my understanding of an industry that I once loved.

2) It was 2009 and I knew that these “mommy bloggers” had something. I realized I could either sit back and wallow in this new medium taking my job as on-air talent or live the “if I can’t beat’em – then join them” mentality. So I joined them. Except I had something they didn’t. REAL broadcast experience. I knew how to sell a sixty second ad like a beast. I spent countless late nights building this insane digital destiny that took my family to places we could only dream of.

My blog pulled me out of postpartum depression with the millions of hits I got from women around the world going through the same thing. I was able to relate to an audience that was never possible in radio. I got hired for highly compensated marketing campaigns because I was a pro broadcaster—not because I was a blogger. I did Today Show, GMA and probably 20 other national outlets and continue to do today. I was hired by toy companies to do big ad campaigns on tv. (Let’s face it—what new mom wouldn’t want to learn about toys?) I was apart of a new revolution of marketing that agencies were craving. I became a travel/tech and toy expert all because I leaned into the process. I told stories that didn’t even require a fancy radio title. Those of us who paved the way were called “mommy bloggers” back in the day. Now its a dirty word like “disc jockey.” Pros are radio personalities. Disc Jockey is so eighties right? Welcome to 2020. Digital influencers are the ones to beat.

There is a reason why I’m sharing this here.

I have friends who I dearly love in the business struggling to understand what is happening.

iHeart is the media company who made the massive shift this week. Yes, they are reportedly trying to sell the company—however, they shifted to a more intense digital platform. Hi. The money that I have been taking from radio/tv for more than a decade? Finally caught on.

I can write for a million pages about what I know will change the radio medium and recreate the “live and local” that they claim to live by. However, for years nobody wanted to hear it. It was a fluke and never going to catch on. Hmm. We see where that led.

I know there are a lot of families struggling this morning trying to make sense of things and figure out how they are going to put food on their tables. I know that feeling all too well. In fact, not only was I canned twice but my brilliant husband was let go from his station in Philly that was actually killing their competition. We suffered from cutbacks. His drive brought us to the most amazing place on the planet two years ago. San Francisco is now our home. I’m sharing this because something truly beautiful came out of our massive “oh sh*t” moment. He’s thriving. However, so am I!

I’ve wanted to dip my toes back in the radio business for a long time.

I was an adult contemporary talent in a sports/rock music market of Philly so there wasn’t a fit there anymore for me. San Francisco? Bring it on! Fortunately, I met the coolest and most open Program Director ever. He was interested in me—not because I was on air a decade ago but because of my drive, reputation & insight on selling to agencies through creative story telling ONLINE. Because I was able to work with talent on digital that now surpassed millions of followers. I know exactly how stations can bank without even using their on-air advertising inventory. I have a lot of pride in that.

I’m super grateful to be on the air again at KOIT and I can’t wait to see what kind of opportunities come next from it.  Even more so—give every secret to digital success I know to my new PD! lol He’s awesome. And open to it which honestly, is half the battle for talent. He gets it. Lucky for me!

So how can you be more than “on the beach” my dear radio friends? Take everything you learned from radio and throw it out the window. Get your butt on digital and connect to your audience through your own storytelling. This is your platform. YOU own it. Build that following. You’ll be so much more valuable if you stay in the business with your next job. Then think about how to monetize your YOU. The you that doesn’t even need a radio microphone to make money.  I’m not saying it’s going to be easy. Cause it is a LOT of work. What I am saying is don’t hold back.

My advice to radio companies trying to figure out digital is really pretty simple. Stop telling talent to shut up and let the music do the talking. Fine if you feel that way with your on-air product. It’s a well oiled researched machine. However, it’s terrible making it that way in the assets online. I just clicked on 5 radio stations in the top 5 markets and not one of them even had their talent accessible on their website! They should be above the fold and flashing at me online!

Nowhere is talent found deep in the pages and above all things—not one place to find their own talent on their own digital outlets. That’s bad, radio friends!

Everything radio teaches you is out the window on digital. Let your talent explode on your digital assets and give them the opportunity to tag the heck out of themselves in the process! Everything is an algorithm. When you make your talent only post on your radio assets and not allow them to share from theirs all your doing is not only putting yourself down in the feed algorithms, you’re not helping your talent catch up to digital influencers either.

So how can stations tap into that money lost when they don’t have ANY influencers on their station? Radio websites are terrible everywhere. TERRIBLE. I’ve always been on my husband about letting his people shine online. I get it. Never talk about the competition. The music and station is the star—the on-air talent is the messenger. However, that will put an end to the industry. Let’s face it—radio has what digital doesn’t. Talent. True talent that gets how to sell a product in sixty seconds or less. Show your markets how amazing your talent is. Let your product shine on air but let your talent shine online.

This am I read this article on AdAge about the realities of where digital marketing is today.  All so very true. These digital influencers are ruining their opportunities. They don’t disclose like we do with FCC. (I mean, signing a document attached to a $10k fine? FCC is serious. FTC is just guidelines at this point. No true regulations.)

To anyone who is out of a job at this moment… I’m thinking about you. A lot. Email me! (Joey @ RealMomMedia . com) I’ve consulted many on-air talent who are surviving and thriving these days. I’m not a fan of having my brain picked but I am a fan of helping people who really want to help themselves.

Joey Fortman is the brains behind #RealityMoms. In 2008, after 20+ years in traditional media hosting radio shows around the country, Joey traded in the microphone for a diaper bag, struggling through her own personal crisis: unemployed, overweight, and lost in the land of mommy bloggers. Little did Joey know, her traditional media background would pave the way for success at Real Mom Media. As a sought after media magnet, Joey has been featured nationally on Good Morning America, Dr. Phil, Anderson Cooper, the Katie Couric Show, Dr. Oz, Redbook, The Today Show, The Talk, Fox and Friends & The Newlywed Game. When not at the sports complex with one of her kids, on an island or a grocery store run, or on Facebook Live with #RealityMoms contributors, Joey is obsessed with adult coloring.
All Posts
PrevPreviousI Know 13 is Weird
NextNew Year, New Approach to ResolutionsNext