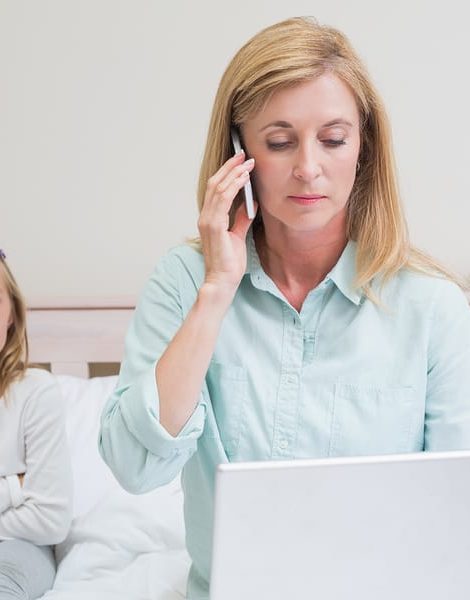 I sit at my kitchen counter with papers scattered end to end, working feverishly on a chapter of a book I am editing for a client. Behind me, my three daughters eat a dinner comprised of leftover chicken nuggets, store-bought mashed potatoes warmed in our microwave and the ever-so-healthy, freezer-burned corn I found underneath some ice cream—because I still believe it’s a vegetable, and my kids deserve a balanced diet.

It’s not the meal I wanted to prepare for them but a publisher moved up a deadline by three days and I had a chapter to finish.

It was not an efficient work day. In between changing words and writing introductions, I picked up kids from camp and set up the slip and slide. I downloaded a new app for my daughter’s iPad and replenished the toilet paper in two bathrooms. I loaded, unloaded and then re-loaded the dishwasher and finished a project for the PTA. And in between, I wrote 3,000 words about personal finance.

As I close my computer for the night, I turn my head to glance at my motley crew, dirty from a summer’s day filled with soccer, the pool and freeze pops with dyes that may cause them to grow a third arm out of their back. My three tween daughters sit side-by-side with their eyes glazed as a Disney sitcom blares on the television screen.

The sight of their gangly legs spread over each other, sharing one blanket while stuffing ketchup-laden processed chicken in their mouth, causes me to catch my breath. I stare in amazement that they still want to sit close and whisper giggle about the shows they watch, despite the fact they spent the past 12 hours together, despite the fact they’ve done this nearly every night for the past eight years.

The familiar feeling of capturing the moment causes me to reach for my iPhone. The girls instinctively look my way and wrap their arms around each other, smiling for the camera. I only need to ask once that they look at me, and not the TV, and I stamp the image.

I show them the photo and my daughter says, “Mom, you should totally put that on Facebook.”

I agree and pull up the app. Before I hit upload, I decide to look at my “Facebook Memories” for the day, a ritual I enjoy daily.

That’s when the cold stark truth hits me square in the Facebook feed.

On this day, eight years ago, I posted an eerily similar photo of my kids. My youngest in pigtails just a shade over two years old and my twins only three. Their eyes are glued to a screen showing a Disney princess movie and a gigantic trough of goldfish sits in front of them. Juice boxes sit scattered around the floor, like beer bottles left over from a frat party. They are in their pajamas, yet it is the end of the day.

My commentary states: “Well, we survived. I didn’t know what I would do when the nanny called in sick this morning. I’m managing a new product launch that I could not postpone, and I had a marathon day of conference calls. I think the girls watched six movies in a row without a break and plowed through a giant size box of goldfish. On the positive side, they now know how to operate the DVD player. On the negative, I think I started a bad habit because when one of them would come up to the door, I would bribe them to keep quiet with Hershey kisses. The money I earn will likely go towards therapy one day.”

There it was, staring me right in the face. I am no different today than I was back then. I am the same crappy mom.

On some days, I am a bribing, begging mother trying to squeeze time out of the day like juice out of a lemon.

And on others, I am awesome. Facebook tells me that too.

Most of my memories show photos of me with my girls, sitting on the floor of a bookstore with a little girl in my lap reading one of my childhood favorites, or we are squeezed together on a park bench, eating frozen yogurt with real fruit layered between gummy worms.

These are the moments I want to remember. More importantly, it’s what I want them to remember.

Worried that I scarred my kids for life by ignoring their needs over the years and filling their bellies with preservatives, I hesitantly ask, “You guys are getting older now. What do you remember the most about your childhood?”

In an instant, three high-pitched voices are talking over each other, detailing the first time they boogie boarded with their dad at Virginia Beach or who won more at mini golf. They recall s’mores with our neighbors and epic Guitar Hero battles in our basement. They talk about our family’s homemade chocolate sauce at Christmas and eating Hibachi on their birthdays.

These are the memories they conjure up on their own, without any prompting from Facebook.

Not once do they mention surviving for an entire day on goldfish and Mott’s apple juice, nor do they complain about watching too much Disney.

I show them the picture from eight years ago, and they coo in unison over their cuteness.

“Look how we are sitting?” one of my daughter exclaims. “We’re in the exact same spots! That is awesome.”

“It is,” I respond, catching my breath again. “We are all where we are supposed to be.”

And I don’t think I’ll need Facebook to remind me how happy I am in this moment.

Whitney Fleming is a marketing consultant, freelance writer and mom to three tween girls. She blogs about parenting, relationships and w(h)ine on her blog, Playdates on Fridays, where she talks about serious stuff, without taking herself too seriously. In her free time, she tries to dispel the rumor that she is a typical suburban mom despite the fact that she is often seen driving her minivan to soccer practices and PTA meetings. Go visit her site at Playdates on Fridays or find her on Facebook or Twitter.
PrevPreviousI’m Rocking My Mom Bod and Enjoying the Summer
NextSchool Supply Shopping is Different this YearNext