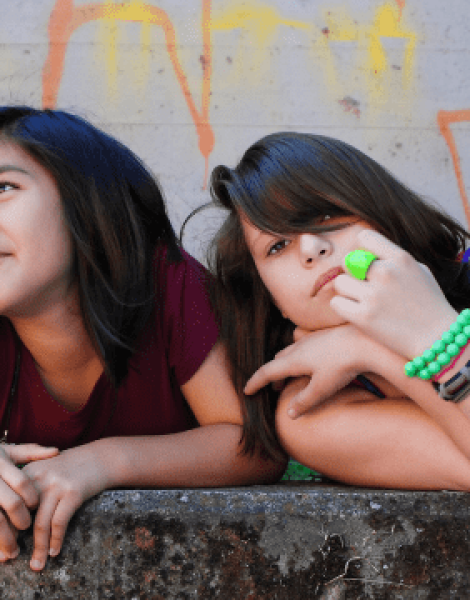 In motherhood, there are so many “firsts” that take your breath away. That first time your baby laughs. The first steps a toddler takes to your outstretched arms. The first time your son takes the school bus or your daughter learns how to ride a bike. When I reflect on these moments my heart feels full.

As our kids grow, the “firsts” come less frequently and the time stretched between them lengthen. Instead of celebrating a new milestone, the goal becomes surviving another Monday shuttling your kids to piano, soccer, the library and Tae Kwan Do while serving something edible for dinner in a Tupperware container that is BPA-free, of course.

And then, out of nowhere, another first occurs. Except this time it doesn’t involve the potty, or school, or sleeping through the night in her very first big girl bed. Instead, it’s the first time your child rips your heart out, tears it to shreds, stomps all over it, and kicks it to the side for good measure.

Last night, I shared with my daughter what I thought would be some great news. She was asked to take a placement test for accelerated math. Exciting, right?

My daughter felt differently. She did not want to take this test, and felt that the class would be too difficult for her. She felt challenged enough, and did not want the additional work. Of course I explained to her that she could do anything she put her mind to, and that we could discuss the options after she took the test, but she would have none of it. I continued my lecture. She held her ground.

That’s when she said it.

I know. I couldn’t believe it either. I was shocked, dumbfounded, stunned. I felt like she just slapped me across the face. I asked her if she was sure if she meant it and she nodded her head in the affirmative.

I then told her very maturely, “Well, that can be arranged.” I rose up from my seat, turned on my heel with my head up high and marched myself right out of the room.

It took me about seventeen steps before I could feel the tears well up in my eyes as I started the dinner dishes. This was not the relationship I have worked so hard to maintain with my daughters. This was not supposed to happen to me. Maybe other moms who didn’t work so hard at communication, but not me. I was focused on being open and honest with my girls, I used understanding tones and tried not to yell (a lot), I worked hard at being the compassionate mother who “gets it.” Although I ran my house in a sort of dictator-like fashion, my husband and I always worked hard at listening to our kids and ensuring they felt like their opinions mattered.

But we went off the rails. She just gave me the proverbial middle finger and I did the equivalent of the teenage door slam. It may not have been as dramatic as the “I hate you” or other verbal barbs that young girls spear throw at their mothers, but to me, well let’s just say it rattled my cage.

It was the first time she challenged me

A few minutes later I called my husband. Knowing that I was exhausted from a busy weekend, I told him what happened in between saying things like, “I know I am just being sensitive” and “I think I’m just tired.” He (thankfully) agreed that while neither of us thought she completely understood what she was saying, we also needed to teach her a lesson. We both feel that it’s important to ensure our children understand that both words and actions matter, so we devised a plan.

It was simple. If she did not want to talk to me, I would simply follow her wishes. I would ignore her until she apologized (without prompting) even if that meant she did not go to bed or to school the next day. She launched the first cannon, but I was going to win the war, or at least this particular battle.

I immediately put my plan into action. I walked right by her as she sat on the couch with her sisters playing Minecraft and ignored her. Although she didn’t even look up, I felt like my attitude spoke volumes. I went up to my room and ignored the heck out of her for approximately eighteen minutes.

That’s when I heard my youngest ask for her turn on the iPad, and a few seconds later there was a knock on my door.

“Mom, I’m really sorry I said I didn’t want to talk to you anymore. I didn’t mean it,” my daughter softly said to me.

As I tried to tell her that I only wished she saw all the intelligence and talent and beauty in herself that her teachers and friends and father and I can see, the tears started flowing uncontrollably out of my eyes.

And that’s when another milestone happened. My daughter rushed over to me, threw her arms around my neck, and for the first time, she put MY heart back together.

As we held each other silently for what simultaneously felt like an instant and an eternity, I knew our relationship changed. In one moment, we both saw each other at our worst and then at our best. I was still her mommy—the one who kissed her forehead each night and made sure her blankie was within reach—but I also had to accept she was growing up.

She wanted to make her own decisions

She wanted some power and control over her life, and in her own way, she was asking me to hand it over. And in order to not lose her, in order to keep her close, I had to oblige. “I want you to take the test, but the ultimate decision on whether you participate in the class will be up to you; however, you’ll have to discuss it with Dad and I, and meet the teacher.”

“That sounds fair, Mom. I’m good with that,” she said. And then, as if to remind me that she still needed me, she kissed me on the cheek and skipped out of my room. My heart felt full again.

I am not so naive to believe that this won’t be the first of many “challenges” I have with my tweenage daughter and I know that that the issues ahead of us will grow in size and scope. However, I am hopeful that we both learned a little bit more about each other, and we remember more about putting the pieces back together than tearing them apart.

And I need to get my big girl panties on, because this is going to be one heck of a ride.

This post originally appeared on Playdates on Fridays. Reprinted with permission.

Whitney Fleming is a marketing consultant, freelance writer and mom to three tween girls. She blogs about parenting, relationships and w(h)ine on her blog, Playdates on Fridays, where she talks about serious stuff, without taking herself too seriously. In her free time, she tries to dispel the rumor that she is a typical suburban mom despite the fact that she is often seen driving her minivan to soccer practices and PTA meetings. Go visit her site at Playdates on Fridays or find her on Facebook or Twitter.
All Posts
PrevPreviousThere is No “Just” in Adoption
NextSaving Money When Your Child Goes Away To CollegeNext