Touring Universities Near and Far

My oldest child, my baby, is touring universities. It’s not possible for him to be preparing to leave home in just a few short months. College tours started last summer with Madison, Wisconsin. Followed by Montana State, Iowa State, and the University of Minnesota is right around the corner. North Dakota State University, University of Seattle, University of Iowa…all of these potential next ‘homes’ for my baby. I suppose at this point I should stop calling my football playing, taller and bigger than I am, legal driver a baby. He’s a young man, getting ready to face his next adventure.

I keep hearing that by the time they are ready for university, as a parent, you’re ready to help them out the door.

As the independence muscle is flexed, the freedom muscle starts to grow. The parenting constraint at times is in conflict with this growth. My son has two jobs, takes a full load at school, including multiple college level courses, is involved in Boy Scouts and plays varsity sports. He’s a quiet kid at home, sarcastic as heck (umm….he may come by that honestly….just saying’), and generally even-keeled. I hope we’ve taught him to manage his time, his money, and himself. It’s one thing to teach a kid to eat properly with a fork and knife. It’s another hoping you’ve given them the skills for the world at large. Wanting them to succeed at everything, knowing they have to fail at some things.

I’m struggling with the need to let him be independent while still requiring him to make his bed every day. Two ends of that spectrum collide daily. He does his own laundry and recently I’ve found myself wanting to help him out. Two years from now, I won’t be able to do his laundry for him by simply walking into his room and grabbing his hamper…after putting all the clothing on the floor into said hamper. I miss our car rides together. Before he could drive, he was captive in the car with either myself or my husband on the way to every event in his life. Now, he simply drives himself and there are days where our paths don’t intersect. Maybe it’s life’s way of preparing me for the switch from a daily hug to a *hopefully* daily phone call.

As my first gets ready to leave the nest, I’m holding on tight.

We’ve prepared him to enter the world, want him to spread his wings, create his own life. While a part of me will mourn him no longer living at home, my heart will be full knowing he’s out there—in the world—making a path. 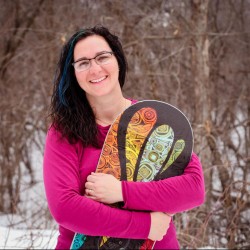 Joy Hedding
Joy aka Evil Joy is wife to one Dr. Evil and mother to four children she often refers to as spawn. Joy is a snowboarding fanatic and loves to share her exploits - snowboarding and otherwise - on Instagram. She currently spends copious amounts of time taxiing her children from one place to another. Frequently funny, always honest, and occasionally serious Joy blogs about everything from dealing with messy teenagers to navigating life after PTSD. Joy has been published in the anthologies "Surviving Mental Illness Through Humor" and "Only Trollops Shave Above the Knee" and has been featured on Sammiches and Psych Meds and UrbanMommies.com. Her blog is Evil Joy Speaks and you can find her on Facebook and on Twitter.

Latest posts by Joy Hedding (see all)
2019-05-20
Previous Post: Every Family Needs a Dog
Next Post: Ten Things You Need to Know About Motherhood