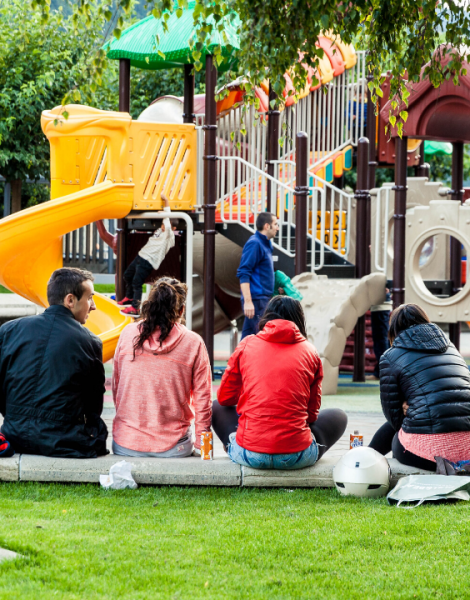 I was visiting a friend recently—in what was probably the eighth or so social visit since the arrival of my son nearly two years ago — when she suddenly diverted our discussion of dining chair fabrics to kids.

“You know, for a moment there—a very brief moment—I wanted one,” she said.

I looked into her eyes, waiting for them to betray the inevitable punch line.

There was only earnestness as she continued. “Suddenly I panicked,” she said. “I was convinced I was missing out on this huge, important life-affirming thing. I was suffocating.”

“What did Deric say?” I asked. She’d been married less than a year to the man who’d finally caved to her ultimatum of marriage.

“That he would never stand in the way of something I truly wanted.”

“And do you still want it?”

“I think you should,” I heard myself say.

The words poured out of my mouth of their own will. She looked at me without emotion, waiting for the inevitable string of reasons to follow. I shook my head and slapped my hand over my mouth.

Then, almost immediately, I was backtracking again.

“I don’t think you shouldn’t have kids, either. I think you’d be great at anything you decided to do. Except maybe squid training. You’d suck at that.”

I shoved a cracker into my mouth before my foot could take up permanent residence. Thing was, I knew EXACTLY why I’d said it. I’d converted. I was one of THEM. It had finally happened.

When I was pregnant with my first kid, I noticed a marked change in the way people interacted with me. Not all people, mind you. It was specifically the parents of small children that made me uncomfortable. People I’d know for years now looked at me with an expression of … hunger. Ravenousness, even. Untempered, unhidden, unmitigated, unconcealed lust.

I chalked it up to hormones and pregnancy brain. Those were both known to cause paranoia, right? That’s a standard symptom, along with nausea and heartburn.

Except here I was suddenly doing the same damn thing.

I wanted Keri to have kids. Now. This very second. And for her kids to have the exact same napping schedule as mine. And, while we were at it, for her to magically no longer own her adorable condo in Queens but rather live next door to me, out in the suburbs of New Jersey, ideally in the rundown duplex currently inhabited by two rival fraternities. Then she’d understand why I smelled of broccoli water and bodily fluids. She’d graciously ignore the cream cheese in my hair, just as I’d be blind to the rivulets of spit-up caked into the back of her cardigan. (Apparently, she’d also turn into the kind of person that wore cardigans.)

I was practically salivating at the image.

Parenthood does that to you. Or, at least, to me. It’s not so much a misery-loves-company thing, though I’m sure that enters into the equation at least to some degree. But I can guarantee you the primary motivation certainly isn’t some altruistic “Having a child is the greatest joy I’ve ever known and I just want you to know this boundless joy for yourself” thing, either.

But we can pretend that’s part of it, too, if you’d like.

It’s more of a “this just isn’t how I pictured it and I couldn’t tell you how I managed to become so isolated and lonely while simultaneously never having a moment to myself and now my primary role in life is something I’m not sure I’ll ever fully understand or find competence in, but maybe if I find someone that knew me before, that knows that I’m more than this and that is facing all the same confidence and sanity rattling challenges, I might be ok again—or at least remember what okay felt like” thing.

You know, it always angered me off when people said things like, “It’s a joy you can never know until you experience it.” That made me never want to have kids just to spite their piousness.

In fact, I was with my mom and a bunch of her friends a few years ago when they started spinning that kind of rhetoric at me, trying to convince me I should be abandoning all my other life goals in pursuit of procreation. My mom interrupted them all, setting down her wine glass with a clunk, and declared, “You and your brother are the greatest joy I’ve ever known. But if I’d never had you, I would have been perfectly happy and fulfilled. There would be no hole in my life. But I’m very glad things worked out this way.”

Now THAT is easily the best advice ever given regarding the decision to have kids. Nectarines are my favorite fruit, right? Well, it’s like if I’d never had one, would I miss the taste? And would it make me less of a person? No, no it wouldn’t. That would be ridiculous, right?

So screw what anyone else says—you do you.

But you should also still consider having kids. For my sake. So get on that, would you?

A member of the Liberal Elite herself, Elly is still recovering from growing up in a Red State. Born and raised in North Carolina, she moved to Manhattan for graduate school and to pursue a career in the music business. Weary from consistent marginalization by the patriarchy, she left both the industry and NYC, opting to work for a not-for-profit and moving to the suburbs of Jersey where living near a Superfund site promptly gave her cancer. Once in remission, she read far too many self-help books, learned to embrace life and abandoned her previous career to write and procreate. For more information visit EllyLonon.com. You can find her on Facebook and Twitter or catch her Ukelele Fridays on YouTube.
PrevPreviousFive More Minutes
NextTop 10 Risky Behaviors of Teen DriversNext