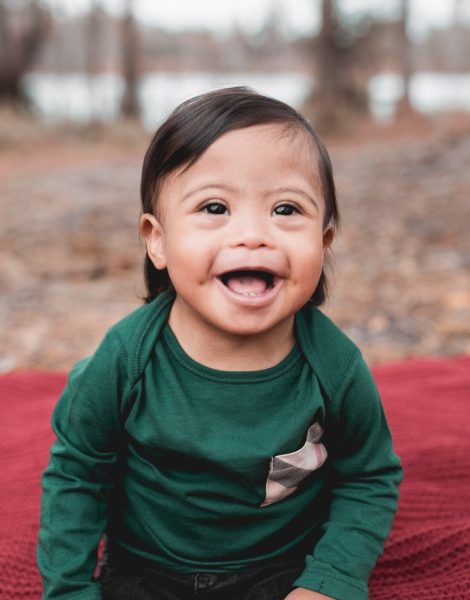 The Light You Seek

Karina, Jill, Courtney, Laura and I were pregnant together in 2016. Our six children (Laura had twins) were born within four months of each other. I’m not sure I’ve ever consciously appreciated how truly special it was for the five of us to share that time together—along with all of our good, bad and ugly parallels since giving birth—until I sat down to write about Zolan.

We held our breaths for one another as we approached every pregnancy milestone leading up to each labor and delivery. But when I think of Karina’s prenatal journey with Zolan, the moment that stands out the most is when she shared the news that diagnostic testing had confirmed what early routine screenings had already suggested.

It was one of the many things we had each feared as we rounded out our first trimesters: one of our six babies would be born with Down syndrome.

I was so distressed by the news, I called my parents—both retired nurses—to help me process what was happening to Karina’s family. Rather than rattling off all the challenges she and her husband, Brody, would be facing, my dad replied, “Katie, if I found out that I was having a child with Down syndrome 40 years ago, I would have been absolutely terrified. But not today. With all of the advancements in research and understanding of Downs, readily-available occupational therapy and a much broader inclusion in our society, many of the people affected by it are living and thriving in ways that were never believed to be possible before.”

As the phone call with my parents ended, I prepared to reach out to Karina. Still unsure of how I felt and veritably clueless about what to say, I tapped her phone number and waited for her to answer.

Her voice was completely drained. Her throat would catch on every couple of words, and I was struck in that moment by the sheer courage she was summoning to reframe her own pregnancy journey so that she could genuinely reignite the raw excitement and pure joy she had been feeling — and that we had all been sharing—up until the devastating diagnosis. But it wasn’t until I said it out loud that I realized I truly believed it:

“Karina,” I began after a period of silence in which I couldn’t hear it, but I was certain that we were both crying. It felt important that I say how I felt without so much as a quiver. I paused briefly and continued…

“That little boy is going to teach us more about life than any of us could hope to comprehend on our own. He’s going to show us that he’s the, quote, unquote, ‘normal one’. It’s the rest of us who are the crazies.”

At our family’s first NDSS New York City Buddy Walk in 2017, I began to see it for myself. On the faces and in the laughter of all of the children, teens, and adults with Down syndrome, who were celebrating their day, I saw a preview of all the life lessons to come. The uninhibited glee. The unassuming kindness. The unpretentious and authentic humility. The wide-eyed essence of innocence that Jill, Courtney, Laura and I will mourn as our own children grow. It’s as if Down syndrome suppresses the part of the brain from which all envy, jealousy and hate emerge. Only Zolan will know the secret to keeping that constant state of awe and wonder. The rest of us won’t want to venture too far away from the light he shines on life’s deepest meanings and simplest beauties. It’s a light that many of us struggle to keep on through even our most superficial periods of darkness. And our existence only feels all that much shorter when you realize how much of the light you completely miss.

You ever want to see someone truly dance like no one is watching? Join a Buddy Walk one day and then just watch. And learn.

Donate to the National Down Syndrome Society via
#TeamLittleZoMan’s Fundraising Page!
Friends, family & blog readers:
Be sure to select Sydney’s member page
with #TeamLittleZoMan,
so that we’re personally notified of your contribution.

This post originally appeared on Momganized. It has been reprinted with permission.

Katie Peake is on hiatus from corporate Manhattan to dedicate some time to motherhood. She is blogging about the sh!t that is helping new parenthood seem less chaotic for her family at Sh!t That Worked for Us and sharing ideas on how to organize all that sh!t at MOMganized. She and her husband, Carlyle, offer no guarantee that the Sh!t That Worked For Us will work for other parents, and any parenting advice offered on STWFU or MOMganized is purely anecdotal.

This generous #RealityMom or #RealityDad has shared their wisdom with us.
All Posts
PrevPreviousMy Kid Went to University and I’m Not a Mess
NextThe Important Message for Parents in #WhyIDidntReportNext