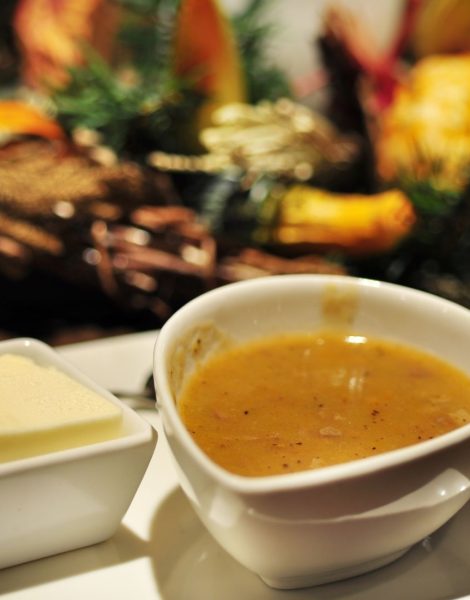 How to Screw Up Thanksgiving

If my first Turkey Day as a married woman had a soundtrack, it would include the theme song to Benny Hill—with intermittent puking sounds.

It was 1997, and we had just moved to Portland, Oregon. Mr. Foxy’s parents and sister were traveling from California for the big event. I was freaking out a bit (a lot) because I was going to be outnumbered by my husband’s family. Fortunately, my cousin was attending college in the area and decided to join us to eat free food act as my wingman.

We had a couple of things going for us:

But we had more things not going for us:

Still, we were determined to put on the BEST THANKSGIVING EVER.

The first hurdle was the turkey. I needed to make the BEST BIRD EVER. After all, my new mother-in-law was coming, and I had to impress her. Unfortunately, we had ZERO experience with turkey. A friend of mine (who already had a few Thanksgivings under her belt) told me to stuff the turkey with lemons and oranges and tomatoes and onions and garlic. That it would be the most juicy and delicious turkey ever. Fabulous. Problem solved.

The next hurdle was the stuffing. At the time, I was on an ANTI-STUFFING* crusade. Everyone else liked stuffing just fine, but I didn’t. I had horrible flashbacks of mildly-seasoned, mushy piles of cubed bread, and I HATED them. I was absolutely, 100% morally-opposed to stuffing. And because I hated it, dammit, IT WOULD NOT BE SERVED IN MY HO– USE. (My new husband was smart enough not to fight me on this one.) Instead I found a promising recipe for baked risotto cakes. I would show all of my guests that this starchy side dish was far superior to stuffing.

The rest of the menu was filled out with mashed potatoes, a simple salad, and bread. Notice the lack of cranberry sauce. I was also on an anti-cranberry-sauce crusade, but I hated that stuff so much I wouldn’t even dignify it with a substitute.

Mr. Foxy and I spent the morning running around like idiots getting everything ready: fumbling through the turkey prep, peeling (and dropping) potatoes, making the risotto, etc. We stumbled our way around that kitchen, but somehow everything was going okay. We were on track. We were going to rock this holiday. Despite the mess and the mayhem.

Then my in-laws called from the hotel. It seemed my mother-in-law had food poisoning or the stomach flu. Either way, she was not doing well. AT ALL. Not wanting her to be alone in the hotel, we invited her to lay low at our house. While the rest of us partied on—we were so considerate. (And suddenly I was totally off the hook for the quality of the turkey.)

As it turns out, the turkey came out beautifully. A quick taste-test confirmed it was moist and savory and delicious. Being his first time carving a turkey, it took Mr. Foxy quite some time to get the meat onto the serving platter. I admired his determination as he struggled to get that carving knife to cut through that slippery bird with the surgical precision of a chainsaw in a horror flick.

I mashed the potatoes (only coating one wall and the side of the refrigerator with fluffy white bits.) The risotto cakes were miraculously golden and smelled heavenly. Everything was coming out beautifully. (Except the vomit from my mother-in-law—that wasn’t pretty.)

I was busy guzzling wine preparing the salad and bread so I left the gravy making to my husband and father-in-law. They expertly mixed in the drippings with flour and turkey stock. Did I mention the drippings? Yeah, more on that later…

We crammed around our tiny table to feast on our meal. My mother-in-law’s puking had slowed down a bit so we decided to dig right in. We piled on the turkey and mashed potatoes and risotto cakes. We poured that expertly-crafted gravy all over EVERYTHING. And set to work on eating entirely too much.

That first bite clued us in on our fatal mistake. That fabulous fruit that flavored the turkey so wonderfully? Well, it produced lemon and orange bile in the drippings. With just one taste, we discovered the gravy was overwhelmingly citrus flavored. No, not citrus flavored; it was essentially THICK, MEATY LEMON JUICE.

To everyone’s credit, no one started puking along with my mother-in-law. But I wouldn’t have blamed them if they did. It was THAT bad.

We all dutifully scraped the gravy off of the food as well as we could. Because there wasn’t much more food in the kitchen (piss poor, remember?), everyone choked down every last bite in solidarity. But thanks to my ANTI-STUFFING CRUSADE, we feasted on seconds of the risotto cake—WITHOUT gravy.

Only two people didn’t regret their meal that evening: my mother-in-law and our cat, who got a bowl full of tuna sans the citrus slop.

And the moral of the story is ONCE AGAIN: Always have backup gravy. Always.

*Don’t worry. I love stuffing now. I even make two kinds every year.

This post originally appeared on Foxy Wine Pocket. It has been used with permission.

Kathryn Leehane is Foxy Wine Pocket. She loves to tell stories that make you spit out your drink. Her writing is published in several anthologies and on popular web sites, including Scary Mommy, Redbook Magazine, The Huffington Post, and BLUNTmoms. In her downtime, she inhales books, bacon, and pinot noir, and her interests include oversharing, Jason Bateman, and crashing high school reunions. Follow the shenanigans on Facebook, Instagram and Twitter.

This #RealityMom or #RealityDad has graciously agreed to share her word baby with our site and we are eternally grateful.
All Posts
PrevPreviousTeaching our Children to Overcome Their Fears
NextDear Sleepless Mom: It Gets EasierNext