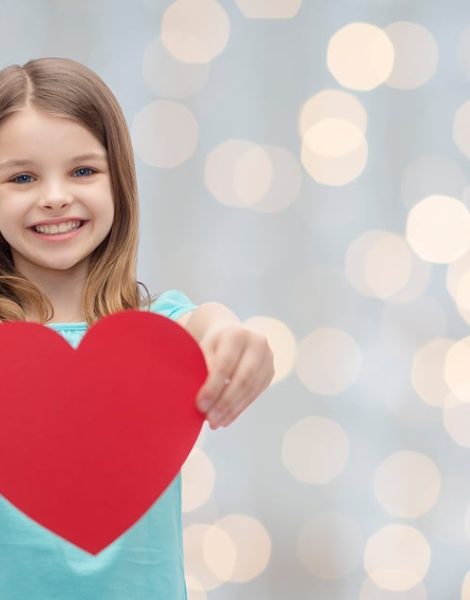 When my daughter was a toddler, she was fond of giving big, sloppy kisses on your mouth—or your ear, cheek, foot…

Really, the kid was a smooching machine and I loved every minute of it. I loved her tiny lips pressed against mine as she demanded: “One more kiss, Mumma! Mummmaaa! One more kiss!”

She kissed grandparents, friends, toys, animals- and probably people at the grocery store when I wasn’t looking. She loved to show affection by kissing anyone and everything.

As she aged into elementary school, her big, sloppy kisses were swapped out with hugs—which only seemed natural. As children grow, they learn that, at six years old, you probably shouldn’t be smooching your teacher on the lips.

My daughter became a hugger

So, she transitioned to a hugger. I was fine with that because she still gave me her pecks on the lips before bed each night and randomly throughout the day. Her sweet kisses became more fine tuned and the slobber started to stay in her mouth as she perfected her smooch.

However, I’ve noticed lately that our kisses have stopped. She now kisses me on the cheek. I didn’t like that, so I’d tell her to get her cute little toosh over here to give her momma a kiss! A real kiss!

Yet again, she’d kiss me on the top of my head, or on my cheek, to say goodnight.

At first I thought it was just a phase—she was maybe embarrassed of “kissing her mom goodnight.” I mean, that made sense since she’s eight going on twenty-four.

Then she stopped hugging

However, I then noticed that she wasn’t hugging people anymore. Good friends would stop by and I’d give them a hug and instruct her to do the same and tell them how great it was to see them. “It’s great to see you.” she’d say, with no following hug.

She’d reluctantly cave in and give Ms. Samantha a hug.

The entire time I was reading her behavior as “rude.” Like when you tell your children to say “please” and they don’t listen– you tell them in your stern voice “Excuse me, you say please when you ask for something. Would you like to try that one more time, PLEASE?”

I was no different with my daughter’s lack of physical touch to those that were close to us in our life.
But then I stopped and realized something: I am a hugger.

I hug everyone. I am open with my body and hug strangers I’ve met only moments earlier down the aisles of Target. I still give my mom and dad a kiss when I see them- it’s in my nature. I was raised that way.

Maybe she’s not a hugger

While my daughter and I might have a hell of a lot of similarities, maybe she isn’t a hugger? Maybe that is an uncomfortable line for her? Maybe she doesn’t like being that close to people?

This situation reminded me of my best friend’s wedding: I went to Phoenix for my best friend’s wedding a couple years ago and as soon as we got into town, we met up with the bridesmaids of the wedding. As soon as I saw the Maid of Honor, who I’d not seen in quite some time, I ran to give her a hug. She immediately gave me a hug and said: “Oh, that’s right, you’re a hugger!”

It never really crossed my mind that maybe other people weren’t like that, or that I might potentially be invading their personal space.

With adults, it’s usually a bit easier for us to read a situation than it is for our children. I used the above situation and my daughter’s boundary behavior and put two and two together.

She likes her own space

My daughter likes her own space. My daughter is not comfortable with my determining who she hugs, and when she hugs. And you know what? I should have had this realization much sooner.

To be safe, I decided that I would talk to her about it. So, two nights ago, I brought her into my room and told her I wanted to ask her a question that there was no wrong answer to– I explained that I strictly wanted to know her feelings on an issue. She obliged and sat down on my bed.

“Just out of curiosity, are you comfortable giving people hugs and kisses?” I asked.

She immediately clammed up and looked as though she didn’t know what to say. I reassured her that there were no wrong answers to this question—that this was a question aimed at her personal response, and that I genuinely wanted to know.

Her response crushed me. Mainly, because I knew that the “Is that mean?” part of her response completely stemmed from my always pressuring her into greeting people with a hug.

I stopped and listened to her and tried my best to articulate a proper response to the unveiling of her verbal definition that are her personal boundaries.

I said: “I want you to listen very closely to me for a second. Every time I have stopped and made you give a hug to someone, that was wrong of me. I was wrong, and I am sorry.”

Her big, beautiful eyes became even larger and I continued…“Your body is just that: YOUR BODY. The same can be said for your personal space, which is the space around you. No one can determine who is allowed to touch your body, except you.” I continued.

She stopped me: “But what if you give someone a hug and I don’t want to give them a hug too, does that make me mean?”

“Absolutely not.” I responded. “It means that you have your own boundaries, and all people must respect one another’s boundaries. If you want to give someone a hug, it’s okay to ask them first, just like when people ask you, ‘Can I have a hug?’ it is okay to tell them ‘No’ if you don’t feel like giving them a hug.” I explained.

The two of us went back and forth for a while and I did my best to apologize for my wrong-doing, but most of all, I made sure she understood that she does, in fact, have possession and right over her body. I explained that while the two of us may have many things in common, this was something that was okay to be different on; I furthered that with ways to tell people you are not comfortable with them touching you, when and how to ask for help if someone won’t leave you alone, and that I will always have her back with whatever she decides.

To be honest, I’d never given thought to the fact that she’d maybe not feel the same way I do about hugging friends, or friends of friends. I made certain that she understood she can, at any time, say “no” to something that does not make her comfortable, and that she owns her body and no one else.

Raising kids is such an interesting journey. I am told over and over again how similar my daughter and me are. My own parents tell me almost daily how my daughter is exactly like me from her personality to her funny little ticks that mirror my own. However, this was a lesson for me. Our children are not, in fact, always like us no matter how much it may seem that way, and it’s up to us to learn from their cues.

I talk endlessly about respecting other people, and not judging people by the choices they make, or the lives they lead, yet all this time I’ve been blind to the fact that I wasn’t respecting my own child’s choices.

So, going forward, when I greet someone with a hug, my daughter knows that she doesn’t have to follow suit; she knows that a handshake, or a kind verbal gesture is just fine.

This post originally appeared on SmashleyAshley.com – A Blog by Ashley Alteman. Reprinted with permission.

Ashley Alteman resides in San Diego with her family of three; six if you include her two lunatic dogs and her escape artist rabbit, Edwin. SmashleyAshley.com chronicles Ashley’s day-to-day life with her eight-year-old daughter, “Barb Marley,” and her ever-so-patient husband, Justin.

This generous #RealityMom or #RealityDad has shared their wisdom with us.
All Posts
PrevPreviousHelping Kids Cope with Separation and Divorce
NextAfter 72 Years – It’s Still Only YOUNext