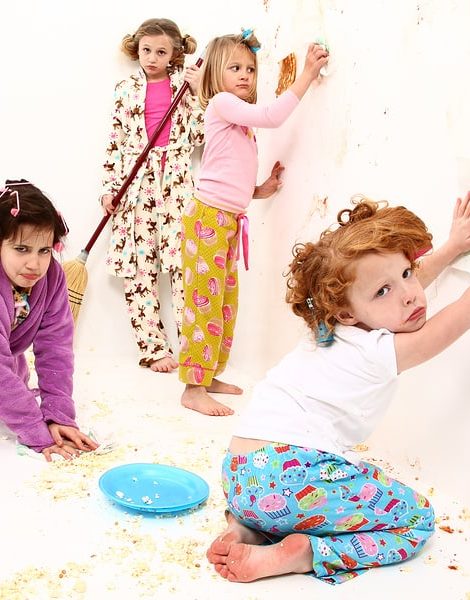 We asked #RealityMoms contributors about what real life parenting is like.  They gave us a peek into what it’s like to be a mom in their house.

I bought a new TV for the kids to give to hubby today for Father’s Day. He loved it but the old TV stand was not the right fit. So we went to the store and chose a new one. Well while he struggled to put it together, lots of swearing could be heard, then stomping. He stepped on and broke his new glasses while trying to put the darn stand together. It is half put together and he is watching it right now but he is also not too happy. @cookwith5kids (Sara Lafountain)

My son was 2 and he was happily playing with his best friend in the schoolyard supervised by their nanny. I asked if she was ok to watch while I headed into the school for a moment. I did my business and left the school. I was two blocks away in the car when I realized something was wrong. My son was not with me. @mumrevised (Kristine Laco)

I did the “your ankle is not broken, suck it up” to my son. It only took a day for it to become obvious that it was actually broken. I felt awful but in my defense he was in a “every boo boo is broken” phase having just gotten a cast off his wrist the week before. Sigh. @jensalittleloopy (Jennifer Pollock Russell)

We took our kids to play in the water fountains/sprinklers at a playpark. The kids were having a blast, and for at least an hour they ran around a rather elaborate series of platforms and ramps, with water running down from one area to another. I was just grabbing my 4yo daughter out of the structure, because she’s done and has angrily declared she wants to get dressed, when another mom comes up and asks me if I have a son, too. Dread washes over me as I nod yes. With a refreshing lack of judgement in her voice, she tells me, “Oh, well, he’s over there and he’s pooped. I think he needs your help.” Sure enough, I see my Boy standing toward the bottom of a ramp across the park, eyes slightly wild and searching for me. Passed the Girl off to my husband, grabbed some Handi-wipes and a plastic bag from the stroller, and splash around the structure to find my poor 5yo son. When I reach him I’m only half surprised to find that he hadn’t so much pooped in his pants, as he’d pulled them down, and sat on the railing of the ramp. There he had deposited a GIANT turd, which had formed an unholy bridge between the metal handrail and the poured cement wall. I’d like to say this was the first time such a thing had happened, but I don’t like to lie. Mother of Serendipity (@Serendipity1974)

I had no one to watch my daughter today while I went to work and we are down a few people at work so I had to come in. So I am working with my 5 year old right beside me. I packed up half the house for her and so far so good but I am sure a melt down is coming soon. Stage Too @beans1031 (Gina Marie)

So, what is YOUR example of real life parenting?  Share it with us in the comments or on social!

This generous #RealityMom or #RealityDad has shared their wisdom with us.
All Posts
PrevPreviousHow I Failed to Ruin my Son
NextReady Pedi Go! Self-Care Before Summer Vacation!Next