I recently found myself wrist-deep in a dog’s uterus. (Editor’s note: Brace yourself. There’s a graphic photo below.)

You see, my daughter had her sights set on one toy this Christmas. She talked about it nonstop for months. In her sprawling first grade handwriting, she wrote Santa a letter. She even drew a picture, in case he had trouble reading her words, “I want a rainbow Puppy Surprise.”

Have you seen these things? Friends tell me they have existed off and on for years but appear to have made a resurgence in the last couple of holiday seasons.

If you have no idea what I’m talking about, let me educate you: it is a stuffed dog, within which is contained somewhere between three and five puppies. In order to retrieve said puppies, you open a Velcro slit in the dog’s belly and pull them out.

What kind of lousy prenatal care did the poor puppy receive that the best they could come up with was a rough estimate of the number of babies?

Can you imagine going in for an ultrasound and having the doctor say, “well, we aren’t really sure, but we can guarantee somewhere between three and five offspring.”

Then, as if the shock and confusion of multiples was not enough, everyone is really hoping for five. 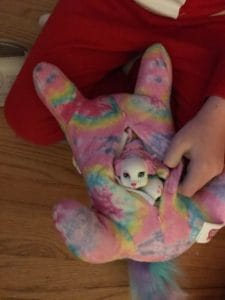 This is why, before Christmas, I played the role of stuffed animal OB. I wanted to prepare myself for the disappointment on Christmas if my daughter opened the dog up and found fewer than five little ones.

There was one puppy already in the box with her mother. The box invites you to see that puppy make weird panting noises. It is not the sound of a happy dog. It is the sound of a dog mid-panic attack after finding herself outside the womb when her 2-4 sisters and brothers are still sealed up inside.

To my dismay, I pulled out only two more puppies. So, three puppies, total. Luckily, it included a runt, which is a coveted prize. Also known as intrauterine growth restriction or possibly twin-to-twin transfusion syndrome, it does not come with a puppy NICU playset.

I guess when you are having multiples, beggars can’t be choosers, but why the vertical incision? This poor mama will never get her VBAC.

None of this dissuaded my single-minded six-year-old.

The other night we filled out Mad Libs and every single blank was “Puppy Surprise.” 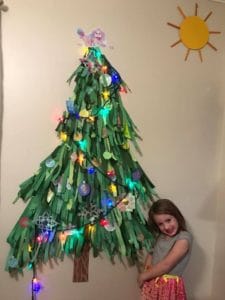 We made our tree out of construction paper this year (toddler issues). We didn’t have a star. We didn’t have an angel. We have a photo of a puppy surprise. I bet getting impaled in her c-section scar by a tree was a definite surprise.

In the meantime, where can I find a good dog lactation consultant? Should I worry that her incision keeps reopening? And should I offer her a placenta smoothie and some mesh underwear?

(Disclosure: This post contains affiliate links…in case you want to experience this for yourself…)

Some of my best friends are people I’ve never met. I don’t mean that in a “strangers are just friends you haven’t made yet” sort of way. They’re from the internet. END_OF_DOCUMENT_TOKEN_TO_BE_REPLACED

We may have been safe, but we were not unscathed. I felt the potential catastrophes around each corner. And in the shadows lurked the great What Ifs. The Could Have Beens packed themselves into each crack of my surface. END_OF_DOCUMENT_TOKEN_TO_BE_REPLACED

I stood among the rubble after a particularly bad explosion and screamed in my head, “HOW MUCH LONGER DO I HAVE TO PUT UP WITH THIS?” END_OF_DOCUMENT_TOKEN_TO_BE_REPLACED

Bullying. The not so last frontier of childhood. Despite the passing of decades, it is one piece of childhood that refuses to go away. END_OF_DOCUMENT_TOKEN_TO_BE_REPLACED