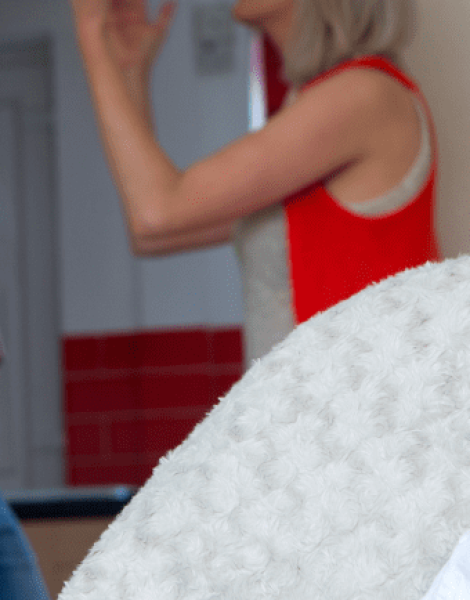 Every new parent goes through that phase when marriage inadvertently crawls to sulk in a dark corner of the basement, hidden by cobwebs, grieving alone, its sobs stifled by the baby’s gassy cries. Mine was no different.

Caring for a newborn takes gargantuan effort, patience, and sheer physical strength. Before I had my daughter, I had no idea how much of myself I would have to give, and give, and give. There was no room left for anything, no me time, no us time, no time, period.

My Daughter’s Well-Being was All Consuming

Her well-being so consumed me that I lost sight of the rapid disintegration of my marriage. I wanted to make time for my husband but sleep deprivation, hormonal fluctuations, and the pressure to be the perfect stay-at-home-mom got in the way. Having different sleep schedules didn’t help either.

The baby nursed all night. Her yet-to-be-diagnosed lip and tongue tie caused loud clicking sounds. My postpartum snoring added to the din. For five months, my husband tried to stay the course. But the sleepless nights were too much for him. He had important meetings to lead, projects to finish, products to launch.

He Slept in the Guest Room

He started sleeping in the guest bedroom. Whatever little closeness we still felt as a couple crumbled away. He ate dinner alone. Watched TV alone. He started doing FaceTime with his parents nightly. His co-workers and friends put the cry-it-out bug in his ear. He tried Ferberization our barely six-month-old. That was the beginning of the end.

We were co-parents living under the same roof. The former hand-holding, affectionate, gregarious couple a distant memory. Conversations were few and far between. When we talked, it was about the baby. By the time she was a year old, we had stopped talking to each other directly. It was through her that we communicated: “Ask Daddy if he wants to go out for dinner.” “Tell Mom I don’t want anything from Whole Foods.”

I Was Just a Mom

At 14 months, our toddler started saying her first phrases. She was so used to facilitating, when I asked him a question directly, she shrieked, “Me ask Daddy. Not Ma!” This was not her normal. Her infuriated, high-pitched voice shook me out of my trance. I was a shell of my former exuberant self. A lonesome artifact in the name of a wife. A friendless vestige. A single parent. I had become all of those, and I was only a mom. Just a mom.

I always noticed the dark circles under my eyes, the sagging folds where my bulging uterus used to be, the dull, lifeless skin I tried so hard to revive with miracle-touting beauty regimes.

Now, I noticed his tired face, his slumped shoulders, his defeated energy-less stance as he looked at our daughter, stupefied. He had aged rapidly, and I had been too consumed by motherhood to notice. I didn’t even know his current co-workers or newest challenges. I had no idea what, or even if, he ate lunch. We hadn’t had sex since—I didn’t remember.

How was I to change our new normal? How would I broach the subject? We had been together for 14 years. Silence had never caused awkwardness. But this was different. This wasn’t the lull of a comfortable love.

This was a relationship on permanent mute.

He texted me an hour after the incident after our daughter had shown us we were no longer husband and wife, we were just her parents. He was in the guest room; I was nursing her upstairs.

I closed my eyes. His lifeless face came alive. With tears in my eyes I ran downstairs, kiddo in tow.
“I need you,” I cried as I tried to hug him.

“I don’t think we can be together anymore,” he said calmly.

Until Death Do Us Part?

When at age 21 we decided to spend the rest of our lives together, there was no doubt that “death would do us part.” When we lived apart for two years because of work commitments, we burned a lot of cash flying across the country every other weekend, because we were going to make it work. When our parents tried to interfere in our child-free marriage for 12 years, we defended each other.

We were always meant to be.

Divorce happened to other people. To loveless relationships. To partners who had grown apart. To those with nothing in common. To those who cheated. To anyone but us.

From “you don’t really mean it” to “do you have any idea what it takes?” to “you only think about yourself” our exchange took many forms: pleading, finger-pointing, shouting, sobbing.

Unfortunately, our daughter witnessed the hysteria, the tears, and the bitterness in our voices. Fortunately, she won’t remember much, if anything.

Three hours of emotional outpouring later, we calmed down. Lying on the floor of our family room, hugging, with him repeating, “We are family. We are in this together.”

It took a week of sustained conversations to reopen the clogged communication channels.

It hasn’t been easy but we are committed. We try to spend more time together as a couple. Our almost-two-year-old is finds ways to keep herself entertained. We still sleep in different rooms, and likely will until she weans, but I slip away from her some nights to spend an hour with him before lights out. They run errands together on weekends while I enjoy a leisurely bath. And, she waits for him to come home from the office, so they can play, father and daughter.

Evenings are full of laughter, squeals, and the usual dinner time battles. Sex has made a comeback. Our marriage isn’t the same as it was pre-child. Nor is it the same as it was six months ago. But it’s alive. We have dusted off the cobwebs, dressed it anew, and kept it front and center. It is cemented in partnership, nurtured with love, and I have vowed to never take it for granted again.

This post first appeared on The Good Men Project.  Reprinted with permission.

Vedavati M., a.k.a. The Cultural Misfit, is a stay-at-home-mom who revels in her various avatars (chef, mentor, friend, playmate, arts and crafts buddy, puppeteer, milk machine, comforter, and more) for her toddler. Her secondary pursuits include writing and exploring new experiences. Somewhere in the mix, she remembers to be a wife.

This #RealityMom or #RealityDad has graciously agreed to share her word baby with our site and we are eternally grateful.
All Posts
PrevPreviousWhen There’s Hate, Remember Love is Stronger
Next7 Emotions Parents of Teens Feel Every Single DayNext