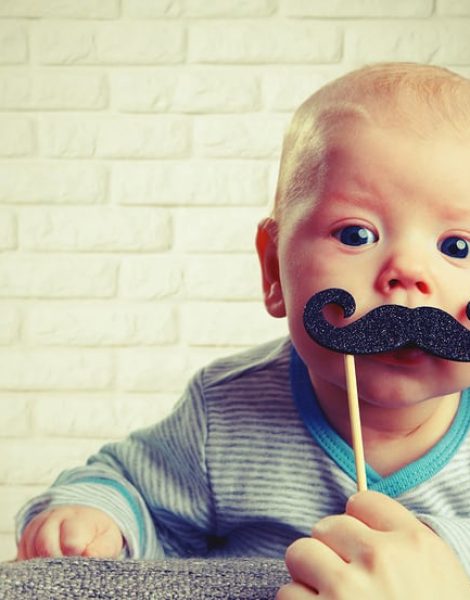 I don’t know about you, but when I first became a mom, I found myself crying A LOT. It was a combination of hormones, lack of sleep and that overwhelming feeling of ‘I have no idea what the hell I’m doing’ that made it close to impossible to find anything about the whole situation funny.

It’s taken me over five years to realize that parenting is bloody hilarious and that laughing about those things that would normally either drive me crazy or devastate me, is far better than stressing over them.

I will immediately clarify—no, I do not laugh AT my kids, but I will have a little giggle under my mommy mustache when my five-year-old storms out of the room announcing she is “running away” because I did not get her the cereal she wanted. 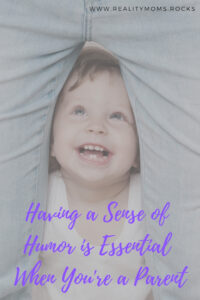 And yes, I did speak to my child after this happened. Yes, I did make sure she was okay and I listened to her as she told me how disappointed she was for having to choose from three types of cereal instead of four, I did it with a straight face and took what she said very seriously.

Deep inside I was pissing myself.

I mean for real—when did parenting become so serious?

And don’t get me wrong, I totally take my role as a parent seriously. I know it comes with a ton of responsibilities, I know my kids are relying on me (and so they should), and I know that I am the grown up in this precious relationship I share with my kids.

Having said that, does it really mean that just because I am the parent, I have to be such a big bore about it?

If we are being totally honest, then I think most parents would agree that kids can be utter a$$holes.

They complain, they have high expectations and they throw a fit if things don’t go their way. They keep us up at night and can fall apart over dropping a single raisin, even if they still have a whole bag of them left. They ask ‘why’ about the most boring things ever—and we’re like ‘who cares why?’. They repeat themselves over, and over, and over, and over again, pushing us closer and closer to insanity, but they never seem to remember anything we say to them. They smell, and for some strange reason – they are always sticky. They think their poop is delightful (it’s not) and they eat their snot.

They are awful and magnificent all at the same time. They are annoying but also our greatest treasure and our most beloved people on the face of the planet. They drive us nuts but also give us the biggest joy in life. Their behavior sometimes makes us feel anger and frustration, but we also feel so much love towards them, it’s actually scary.

All of that (and so much more), can drive anyone up the wall, but what if instead of that, we learned to laugh? I mean, let’s face it—when a three-year-old stomps her feet and crosses her hands like she’s a teenager, it’s kinda funny, no?

The way I see it—I am not a perfect parent (as if that even exists) and if you spend a mere hour in my house, you are most likely going to see my kids fighting, climbing on the furniture, throwing some sort of tantrum and me screaming my face off. But you are also going to see love. So much love I can honestly burst just thinking about it. And laughter.

My belief has always been that humor and laughing can heal and I am so happy to have my laughter lines which will one day, when I really old, remind me of how much fun I had and how much I laughed.

I am not saying for one minute this it’s easy. Trust me, there are days I walk around like the Grinch and count the minutes till the little monsters are in bed and I can have some peace to myself. In fact, there are many days like that but I am getting better at seeing the humor in the difficult moments and through that point of view I have found things have become easier.

But mainly (and this is the key to parenting), I am getting better at laughing at MYSELF. You see, I used to take myself SO seriously. Anytime I ‘made a mistake” I would really beat myself up and feel like crap about it. These days I try to laugh it off. Almost as if I am playing a role in my own soap opera and on the ‘bad days’ I just say to myself that today I was playing the evil bitch part (which I do very well).

I have always stayed away from giving any parenting advice cos I’m no expert and cos I think there is already enough parenting advice out there to confuse the sh*t out of parents without me adding my two cents, but if I could give one piece of advice it would be this: LAUGH.

Life is far too short to do anything else. 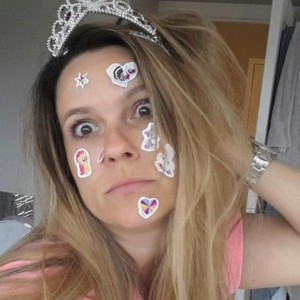 Tova is an actress, writer, blogger and mother of three drama queens.  You can find her at Tova's Blog: My Thoughts About Stuff.
PrevPreviousEmbracing this New Body of Mine
NextI Let My Kids Destroy Our House So I Can Stay SaneNext