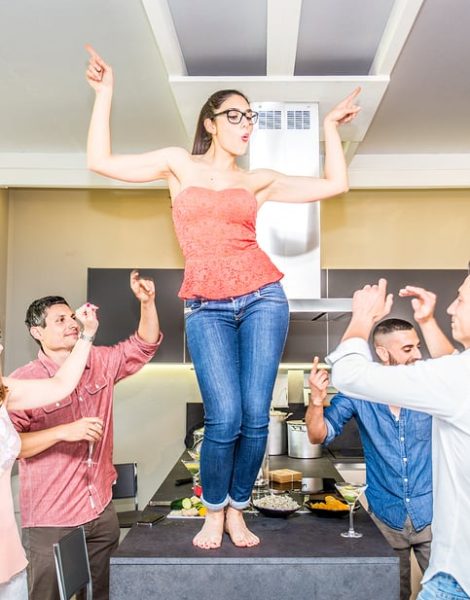 I’ll Never Be Invited to a Neighborhood Party Again

I’m a social gal; I like people. I enjoy parties, meeting new people and finger foods. I adore finger foods. But, I have anxiety when I’m going to a party where I’ll be socializing with folks I don’t know well. Which is the exactly what the neighborhood party we’d been invited to would be. I’d met most of the neighbors but usually it was a quick intro, where I couldn’t tell you their names 5 minutes later. There would be a white elephant gift exchange (Oh God, do I get a silly gift or try to go for the cool/silly/funny/alcoholic gift??), all the neighbors had RSVP’d and my husband could only come for about 30 minutes, because he’d agreed I should socialize while he watched our boys.

The night of the party came and when we walked in, the anxiety hit me hard. I saw there were WAY more people there than lived in the ‘hood. Their house looked like something out of a, “Pretty Homes You’ll Never Be Able to Recreate” magazine and the entire kitchen was made to look like a nightclub, with standing tables, food that made me drool and dim lighting.

“There’s a mixologist downstairs and we have a fun game. Ask people the questions on this paper, write them down and put it in the box. We’ll draw a name for a fun prize!” the hostess said upon shedding our coats. I love prizes! My husband and I visited the mixologist and as I turned around with my drink, I ran into…my EX Boss, who’d moved into the neighborhood recently – joy. I worked for him years ago, while going through my divorce.

Anyway, I smiled a quick hello, moving quickly into the crowd. I downed my drink, ordered another drink and that’s when things started to go south.

This why I’ll never be invited to another neighborhood party.

It’s embarrassing putting this down on paper, so I’ll stop.

I have to tell myself we’re not “that” family, lots of people have an extra two or three drinks when nervous. Lots of moms get fed up with farts, and yell, “I’ll tape your butt-holes shut if you don’t stop farting!” and their sons think that sounds awesome and actually do it. I can’t help it if the neighbors hear me—they chose to have their windows open.

I’m pretty sure we’re normal and somehow ended up in a neighborhood of lots of “not-normal” folks.

Right? This is normal?

Heather LeRoss is the two-time award-winning author of Just Tell Me I’m Pretty: Musings on a Messy Life. Visit HeatherLeRoss.com now and download three FREE chapters of the hilarious book that was dubbed, “Best book I’ve EVER read,” by Heather’s Mom. You can also follow her on Facebook.
PrevPreviousHot Stocking Stuffers for 2018
NextThe Too Often Untold Joys of Parenting an Older ChildNext