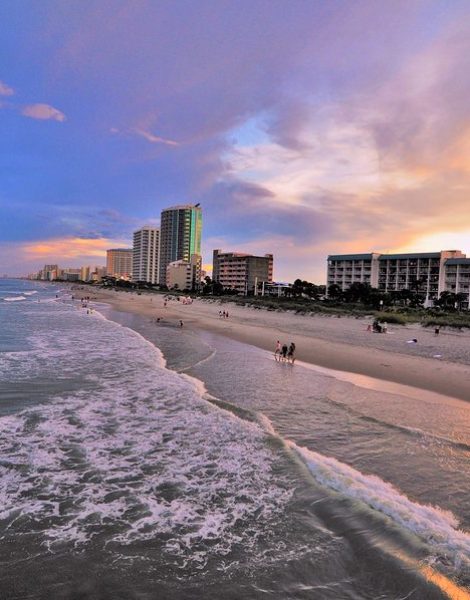 Tips for Traveling to Myrtle Beach with a Toddler

The week of 4th of July, my family and I traveled to Myrtle Beach.

And as any mom can attest ten to fourteen hours in a car ONE WAY is rough… not to mention we HAVE to get back home the way we came!

It actually wasn’t as bad as it could have been.  My son was a rockstar…but his parents?  NOT SO MUCH.

Tips for traveling to Myrtle Beach with a Toddler:

Pack MUCH less than you plan. You’ll spend the majority of the time in your bathing suits, so don’t overpack. I know. We all do it. Just pull three things out after you are down.

Bring a video player.  Right before the trip, we got an iPad.  Needless to say, my son owns that thing!  It came in very handy.

Have entertainment for yourself.  I have AT&T and our trip there and back…. there was ZERO service on I-95 to and from Philly.  So here I was with no 3G…no wifi..AND no cell phone!!  I think it wouldn’t have been as bad if I was prepared for it.

Print out directions. So what if you have directions on your iPhone/iPad/TomTom.  I had ZERO signal— I could never access them! I’ve never had a problem before—but it was a reminder that you should always have the ‘old school’ backup.

Upon arrival to Myrtle Beach, avoid I-17.  It’s a PARKING LOT.  It took us an hour to get from the top of Myrtle Beach to Surfside Beach.

Don’t over expect from your rental agency.  Know that those great pictures you see online may NOT be what you expect up close.

Water your plants before you go and have someone do it while you are gone. It was the saddest thing to see when we arrived home.  I worked so hard to keep those babies alive throughout May and June…and got home and realized they can’t water themselves. They were CRISPY dead too.

Clean out the fridge & take out the trash.  You don’t even want to know what I found when I got home.

DO NOT turn air totally off.   Yeah.  Hubby did that.  It was 103 in our house when we got home.  I could have charged people and held a bikram yoga class in there!!  Sadly…we lost a special pet because of it.  You know those frogs that come in a clear plastic box and they live without food?  Yeah.  Floating.  I cried.  Made hubby take them out. And they stunk… BAD. Boohoo. Poor froggies.

This post originally appeared on Real Mom Media on July 20, 2010.

Joey Fortman is the brains behind #RealityMoms. In 2008, after 20+ years in traditional media hosting radio shows around the country, Joey traded in the microphone for a diaper bag, struggling through her own personal crisis: unemployed, overweight, and lost in the land of mommy bloggers. Little did Joey know, her traditional media background would pave the way for success at Real Mom Media. As a sought after media magnet, Joey has been featured nationally on Good Morning America, Dr. Phil, Anderson Cooper, the Katie Couric Show, Dr. Oz, Redbook, The Today Show, The Talk, Fox and Friends & The Newlywed Game. When not at the sports complex with one of her kids, on an island or a grocery store run, or on Facebook Live with #RealityMoms contributors, Joey is obsessed with adult coloring.
All Posts
PrevPrevious7 Reasons HersheyPark isn’t Just for Kids
NextNo Shame in This Summer Game: Noddy Toyland DetectiveNext