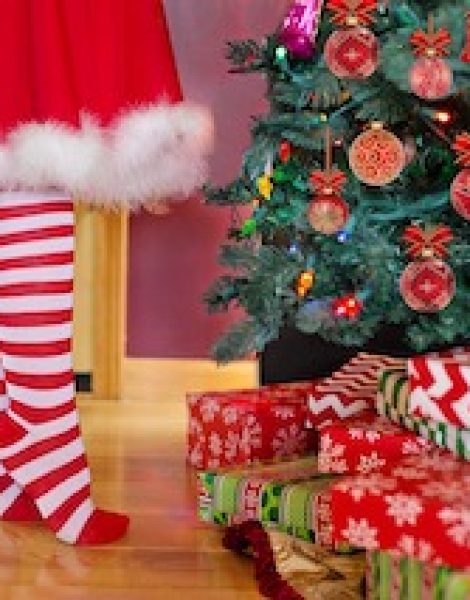 My Version of a Christmas Miracle

A few weeks ago, my daughter announced that she was done visiting Santa. I was sad, but I accepted her decision. Megan had visited with Santa for 12 years, and a dozen visits was enough. My daughter was right that she was getting a bit big for the practice, and was clear that she didn’t believe.

Well, she pulled a tween turnaround and announced that she’d like to go visit the Santa at the temporary Santa House our local park district puts up for December. 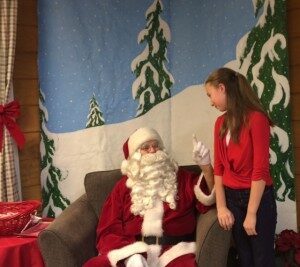 Tonight was the last night Santa would be in residence. It was also cold and rainy. I told her that we didn’t have to go. She said, “Oh no. We’re going. I’m going to get a selfie with Santa!” We laughed at the thought, and I was struck by the fact that when she first started visiting Santa, selfies weren’t really a thing.

She and the world have both changed so very much.

When we arrived at the Santa House and saw that the line was outside, I again gave her an out. I really would have been fine heading in for some hot chocolate rather than seeking refuge from the raindrops under the overhang of the temporary structure.

So we waited. We talked a bit with others in line. And I noticed that my tween wasn’t the only “big kid.” In fact, there were rather a lot of them. One family of teens wearing their high school letter jackets (which declared them to be sophomores) were a bit ahead of us in line. Behind us was a family with kids who, like mine, were junior high students.

I had expected to stick out, but we really didn’t.

Eventually, we made it to the inside of the building and with the line still stretching pretty far ahead of us, we decided to play a game. We like the game “Heads Up,” a charades game you play with a phone, but I needed to save what little charge I had for the photo with Santa. So we played the old fashioned way, and we acted out titles to Christmas carols.

I was struck by how decidedly low tech and old-school our game was. I was delighted by both the laughs and the fact that some things never change.

About halfway through the line, a volunteer discretely handed me a slip of paper and a pen. I filled out the requests for my child’s name and age. I felt sheepish writing down “12.”

“Anything Santa should know,” was the third and final question.

“Santa should know that my girl is here to make her mother happy,” I wrote.

Finally, it was our turn to walk through the door to see Santa. The volunteers had taken the slip of paper and relayed the info on it to Santa.

“Hello, Megan!” the portly man in the red suit with the gray eyebrows and beard greeted her, adding a hearty “Ho, Ho, Ho,” thrown in for good measure.

He spoke solely to her. I couldn’t make out much of what was said, but my daughter told me later that he gave her the option to sit next to him or stand. She said, “I’ll stand, thank you.” He complimented her manners.

He told her how very sweet she was to want to make her mother happy on Christmas.

She smiled, and at that, Santa told her that her whole face lit up when she smiled like that.

“Seeing that smile makes me so very happy,” Santa declared. I don’t know if that’s true, but I like to hope that he meant it, that he saw the sparkle in her eye that makes me feel like all is right with the world when I see it.

We wished him a merry Christmas, opened the door, and stepped out into the cold rain.

“Megan!” Santa called her back. She took a small step back into the Santa House. “Not all 12-year-olds are great. Some are, well…” With his white-gloved hand, he made a thumbs down gesture.

“Not you, Megan. You are special.”

He gave her a thumbs up. “That’s you. You’re one of the good ones.”

My tween beamed. She said, “Thank you. Merry Christmas!” We scurried out into the cold rain. The door shut behind us, a big metaphor for the end of our Santa visits. Santa’s send-off was perfect, for both of us.

“Thank you so much for doing that,” I told her.

This post originally appeared on ChicagoNow. It has been reprinted with permission.

Shannan lives in the suburbs of Chicago with her husband and teen daughter. She's a recovery attorney who now blogs at BetweenUsParents.com, ChicagoNow, and as part of the Chicago Parent Blogger Network. Her writing has appeared on the Erma Bombeck Writers' Workshop, Scary Mommy, BonBon Break, Brain Child and In the Powder Room, and her essays have been included in two anthologies by The HerStories Project. She is also freelance writer for regional magazines. Shannan was in the 2013 cast of Listen to Your Mother, despite the fact that her daughter often fails to do so.
PrevPreviousSharing Values with Family Stories
Next10 Tips to Get the Most Out of Your Goodwill ShoppingNext