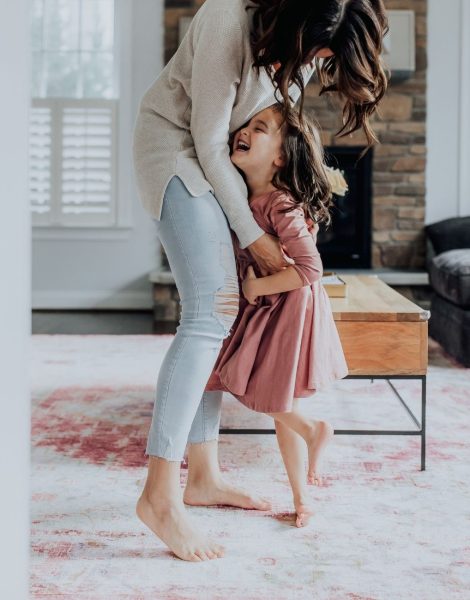 Motherhood: Is it Worth It?

“So is it worth it?” asks my colleague somewhat skeptically from across the cafeteria table. We’re sitting on bar stools—her— obliviously as someone would in their natural habitat, me—painfully aware of my status as a temporary bar stool sitter.

I’m new and she doesn’t know much about me. I am, at this point, a patchwork quilt displaying patches of 5am risings, occasionally stained blazers and usually uneventful weekends. Peeking from behind is the quilt itself, which is everything else that makes you-at-work: personality, work style, resume.

I’m searching for the words I want to tell her—you—but they form into a ready-made, cookie cutter answer and slip out of my mouth before I can stop myself.

I could tell that you weren’t convinced. Who could blame you.

I never revived that conversation, but what I should have told you was that YES, it’s totally worth it but not because it’s the best thing ever. Or because I catch myself smiling whenever I think of my kids at work, but because of all the things I wouldn’t know about my children if I didn’t have them. What makes it worth it is knowing all those little details that make them them and which make ME the expert on THEM and which I’d never have known had I not had them. True, this comes across as some kind of a nonsense Alice in Wonderland type logic, but I know this with every fiber of my being: making these discoveries and curating that knowledge is motherhood’s greatest reward.

What makes it worth it is finding out that my five-year-old son would simply refuse to sleep with his socks on. He never tires of acting out the same elaborate scheme, every night as he first worms his way under the blanket then starts deceitfully wriggling and eventually tucks his bare feet triumphantly in the space above my knees holding his breath, waiting to burst out laughing as I dutifully play my part and reveal my recurring shock…

Knowing exactly what he means when he asks “mama, please give me a dream” or when he refers to someone as his “baddest chap”.

And if we didn’t have our second child (and who could have predicted a dark-haired curly sibling to our strikingly blond first-born?) would I’ve known that at two my little boy would only want to fall asleep on a blanket carefully laid out on the floor, neatly stacking his stuffies in the bottom right corner, and covering them with another blanket, his own, first? I wouldn’t know that he’d invite me to “fweep” beside him and that he’d never develop as strong of an attachment to any stuffy he owns as did his brother to blue Bear. I wouldn’t know that he would teach me what it meant to have the element of fire in your personality as he charges at me, teeth clenched, for a passionate embrace or a game of row your boat. Who knew I’d invent the game of row your boat. I would never get to experience the sense of bereavement which, as it turns out, is such an integral part of watching your kids growing out of the different stages of childhood.

Hell yeah, it’s worth it. You’ll become a Columbus, charting unexplored external and internal territories with your stroller and heart. You’ll be amazed at the discoveries you make, like the fact that you created the mould instead of the cookie, the vessel, not its content. Look at him. You’d never imagine that your younger one so meticulously lining up toy cars to form a row. Getting so upset if someone slightly moved one of them. Grinning at you and announcing with such pride “look I did!” emphasizing the “I” but moreover you would never assume that the mere act of toy car lining bore the potential of filling you up with such a weird combination of intense wonder, curiosity and strangest of all—unexplained pride. You didn’t know that you’ll be punched in your gut daily and that this is what makes it worth it, because you never cared so much about anything else in your life.

This post originally appeared on IAMTHEMILK. It has been used with permission.

Katia is the mother of two boys and the wife of one. She is the creator of IAMTHEMILK, a WordPress-recommended blog in the family category between 2014-2015.Her writing was featured on Yahoo News, RedBook Magazine, Huffington Post Parents and other parenting websites and has been published in several popular anthologies.  You can find her on Facebook and Twitter.

This #RealityMom or #RealityDad has graciously agreed to share her word baby with our site and we are eternally grateful.
All Posts
PrevPrevious7 Ways Divorce is Like Childbirth
NextChoosing your Fitness TeamNext