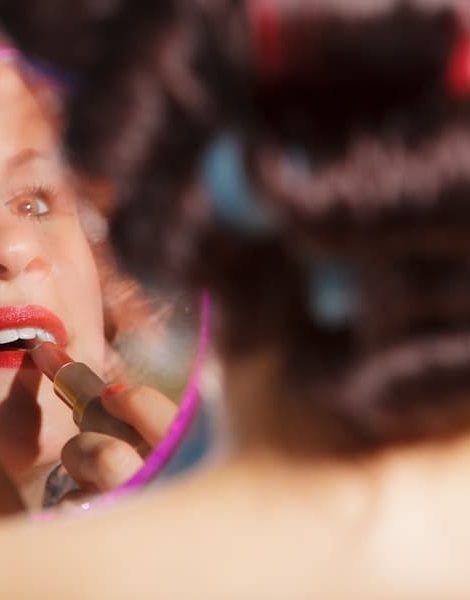 She leapt from the shower, cheeks flushed from excitement and warm water. “Why stop with clean hair?” she asked the woman grinning back at her in the hazy mirror. She reached for her mascara wand and brazenly plumped her eyelashes.

“How long do you think you’ll be?” her husband’s voice fought its way through the closed door and steam.

“There’s no telling, babe,” she answered, giddy at the prospect. “I’ve never been to this one before. It might take an hour, it might take all day.” She whispered again to her rosy reflection, “It could take ALL day.”

The locked door shuddered as a tiny body crashed against it. Then another. Sounds of a scuffle followed as her husband’s voice tightened. “So I should plan on feeding them?” he asked.

She involuntarily clapped. Feeding! Another boon! She wouldn’t have to feed them! Not only could she skip cooking as a full-contact sport, she could also skip the inevitable complaints about the resulting pizza being “too flat” or the crackers “too square.” Holding the towel together with her fist, she pumped the other into the air and jumped repeatedly.

“Mustn’t seem too eager,” she scolded herself. She tried to settle her breath before answering. “Yes, please.”

The frequency and force of the blows to the door increased. Two high voices began screaming “Mom-Mom-Mom” in tandem. She turned on the hairdryer, drowning them out and returning to her reverie. “What shall I wear? I wonder if that white turtleneck still fits. Should I bring a book? Or maybe I’ll just watch all the Facebook videos I can’t watch in front of the kids. I know I used to have free time, but I can’t remember what I did with it!”

Turning off the dryer, she placed an ear against the door. Silence. She opened it a crack, peeking out. From afar she heard her husband demanding, “Bring the wipes back. RIGHT NOW! Your brother is leaking.”

For a moment, she felt guilty about giving the baby all those raisins earlier. The feeling dissipated as she realized she could use the diapering distraction to avoid the usual running commentary on how sad it was that mommies didn’t have penises, too. Then she opened the wardrobe, selecting a pair of pants without an elastic waistband and returned to her euphoria. She chose a pair of knee-high socks that complemented her boots, kicking aside her usual slip-on sneakers.

“Maybe I should keep it casual. I don’t want to look as if I’m trying too hard.” She held a sparkling drop earring against her left ear, contemplating, before sliding the hook through the hole in her lobe. “Then again, it’s not like I get the chance to do something like this every day.”

She strode to the full-length mirror to assess her ensemble. Despite the gray hairs and a few extra pounds, she was relieved to see that familiar face, the woman before children and chronic sleep deprivation. Seizing the energy of her younger self, she bounced into the hallway then leaned into open doorway of the children’s room.

“You’re leaving already?” he asked. She nodded, watching as panic seeped into his eyes. “Do you have everything you need?”

“Passport, ATM card, a mortgage statement, my old license,” she paused to recount the items on her fingers before continuing. “That’s more than enough to renew a license, don’t you think?”

“Well, just be sure. The last thing you want to have to do is go back to the DMV a second time.”

“Yes,” she whispered. As he turned to discard of the soiled diaper, she dropped her passport into the hamper brimming with dirty laundry. “That’s the last thing I’d want to have to do.”

A member of the Liberal Elite herself, Elly is still recovering from growing up in a Red State. Born and raised in North Carolina, she moved to Manhattan for graduate school and to pursue a career in the music business. Weary from consistent marginalization by the patriarchy, she left both the industry and NYC, opting to work for a not-for-profit and moving to the suburbs of Jersey where living near a Superfund site promptly gave her cancer. Once in remission, she read far too many self-help books, learned to embrace life and abandoned her previous career to write and procreate. For more information visit EllyLonon.com. You can find her on Facebook and Twitter or catch her Ukelele Fridays on YouTube.
All Posts
PrevPrevious#RealityMoms Partner: Chuck E. Cheese Birthday Parties ROCK!
NextThirty Things I’ve Learned in my ThirtiesNext