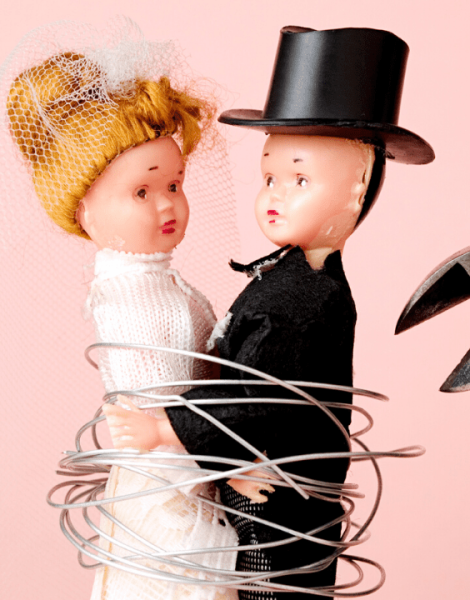 One night, shortly after I separated and my ex-husband moved out of the house, I was just falling asleep after a LONG night of more tears when my house alarm started BLARING. It was almost 3 AM and I was literally scared stiff. I was frozen in my bed, afraid to move, but also terrified that someone might be in my house and I had nothing, and no one, there to protect me, protect US.

I ended up letting the alarm continue to sound until the police came. They checked the perimeter of my house and finally had me get up and open the front door. They did a quick walk around my small home and assured me that no one had broken in. I still to this day do not understand what caused the alarm to trip, and at that hour on top of it.

My kids did in fact sleep through the ENTIRE thing. They woke up the next morning none the wiser to my terrifying experience just 3 hours earlier. And for that, I’m grateful.

But that night reminded me that this was just one of the uncharted and scary territories I was entering now that I was alone in the house without a partner.

It didn’t take long for me to realize that even though I spent a lot of time complaining about a spouse that didn’t “help,” he might have done more than I noticed. Like remembering to turn the water off to the hose in the winter, so the pipe doesn’t freeze. Like taking the cars in for an oil change before the annoying light was a constant reminder of my procrastination. Like changing out the cat’s litterbox or feeding the dogs. Even the littlest of things add up when you are suddenly doing them all without help.

After weeks of having the garbage pile up outside of my house because I had missed garbage pickup (AGAIN!), I finally set an alarm on my phone to remind me to take the garbage to the curb every week. It was another thing my ex had always taken care of, one thing I literally never thought about because I didn’t have to.

Nobody tells you that when you put the kids to bed and you don’t have someone sitting on the couch next to you while you scroll through social media and some show plays in the background, it gets lonely.

Even if you weren’t speaking and didn’t have the most interactive relationship, the shift from silent company to none at all was deafening and lonely.

I wasn’t ready for these little adjustments I would have to make.

Then you see their things disappear and all of the empty spaces in the house that used to house their toothbrush, their towel, their shoes… and you start to wonder how you are ever going to get used to this! It feels like something is missing. Because something (and someone) IS missing.

Finding a way to live and adjust while a part of our family has vanished in the home was a struggle. Until one day I finally realized that I was the one in control. I no longer needed to run things by someone else. I could make decisions about dinner, shopping, cleaning, organizing, schedules and ALL. THINGS. because I no longer had to share these day to day experiences with someone else.

I found myself excited to be ALONE after the kids went to bed because it meant I didn’t have to consult on what to watch or get berated for spending too much time on my phone or computer. I could do whatever the hell I wanted and the only person that I had to answer to was ME.

I was able to get my kids into a pattern and a schedule that worked for us all and before I knew it, it was almost as if I couldn’t imagine what our life had been like before because now things were running like a well-oiled machine. And I was the one conducting the whole thing.

Divorce sucks. I’m not saying any of it is easy. But once you start to see that you are given a blank slate and a great big pallet to do whatever you please with, it sure makes things a lot easier and everyone a lot happier. Even if I do still have to set reminders in my phone to take out the garbage and take my car for an oil change.

Nicole is a divorced mom of three, Realtor, and an expert procrastinator. She enjoys long walks to the kitchen where she tries to remember what the hell she came in there for in the first place. In her abundant free time she likes to share about parenting, divorce, single motherhood, and her experiences raising a young transgender child on her site, MomTransparenting. Follow her on Facebook, Twitter and Instagram
All Posts
PrevPreviousTop 10 Risky Behaviors of Teen Drivers
NextA Love Letter to My Last ChildNext