Don’t Love the Way You Look? Keep the Photos Anyway. 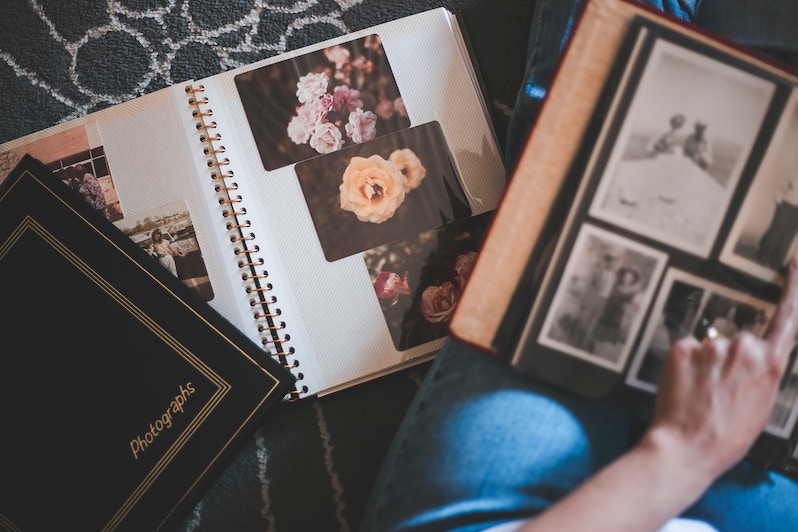 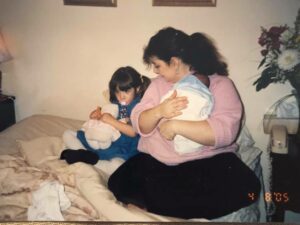 The other day as I was going through some old photos I found this picture.

It was the day we took home our youngest son from the hospital fourteen years ago.

Our daughter had just gotten home from the preschool she was attending and seeing me feed and burp our baby, decided completely on her own, to get one of her dolls and join me.

I see this picture and a part of me just melts. I remember the joy I felt bringing home our new son and feeling our family was complete.

I remember the thrill of watching Lizzy react to seeing me feed her brother and wanting to connect with me.

This was huge because even though she was three, she really wasn’t talking. And the preschool she was attending, the one designed for kids who needed extra help, was not nearly enough for her. We were just told a week before that she needed a school with a much more extensive program.

Though we didn’t really need to be told this because it was so obvious that she was much further behind than the other kids in her class.

Yet here she was, totally present and wanting to be with me as I fed her baby brother.

I adore this picture.

I also hate this picture.

I see a me so much heavier than I had ever had been before.

Unfortunately, the fifty pounds I put on with my third baby, six months before my 40th birthday, wasn’t all baby. Even though I swore he had to be an eighteen-pounder. I was crushed when the nurse said he was six pounds. Not even one little extra ounce over.

I see my fat legs and my bloated stomach. My hair quickly pulled in a ponytail so I don’t suffocate my newborn in my rats nest.

I see our bedroom without a headboard or perfectly placed pillows.

This is not the fantasy Madison Avenue image of motherhood I had in my mind.

My body is flawed. I’m flawed. My house is flawed.

Part of me, the young idealistic part of me that still remains despite years and years of therapy, wants to throw out this image. Never let it see the outside of a drawer, never mind the sometimes harsh eyes of social media.

I see the flaws. Every single one. But I also see my infant son. The one who is now 14, just got braces and loves to play video games.

And I see my beautiful daughter, whose special needs are very significant. To some extent the three-year-old Lizzy in this picture isn’t that far removed from the 17-year-old teenager she is today.

Yet she is. She’s done more than most people thought she could. And she is constantly surprising us. Just like she did this day fourteen years ago when she grabbed a doll out of her room and hopped on my bed so we could feed our babies together.

I’m glad I didn’t throw this one out. Real life is messy, but it’s also stunningly beautiful.

Kathy Radigan is a writer, blogger, social media addict, mom to three, wife to one and owner of a possessed appliance. She posts a weekly essay each Sunday on her blog, My Dishwasher’s Possessed! Kathy is the author of the viral post An Open Letter to My Teenage Son About Drinking. She is a Huffington Post blogger and a frequent contributor to What the Flicka and Scary Mommy. Her work has also been featured on, Yahoo, Elephant Journal, What to Expect, and other online publications. Kathy lives outside New York City with her family. You can follow her on Facebook and Twitter.

Some of my best friends are people I’ve never met. I don’t mean that in a “strangers are just friends you haven’t made yet” sort of way. They’re from the internet. END_OF_DOCUMENT_TOKEN_TO_BE_REPLACED

We may have been safe, but we were not unscathed. I felt the potential catastrophes around each corner. And in the shadows lurked the great What Ifs. The Could Have Beens packed themselves into each crack of my surface. END_OF_DOCUMENT_TOKEN_TO_BE_REPLACED

I stood among the rubble after a particularly bad explosion and screamed in my head, “HOW MUCH LONGER DO I HAVE TO PUT UP WITH THIS?” END_OF_DOCUMENT_TOKEN_TO_BE_REPLACED

Bullying. The not so last frontier of childhood. Despite the passing of decades, it is one piece of childhood that refuses to go away. END_OF_DOCUMENT_TOKEN_TO_BE_REPLACED