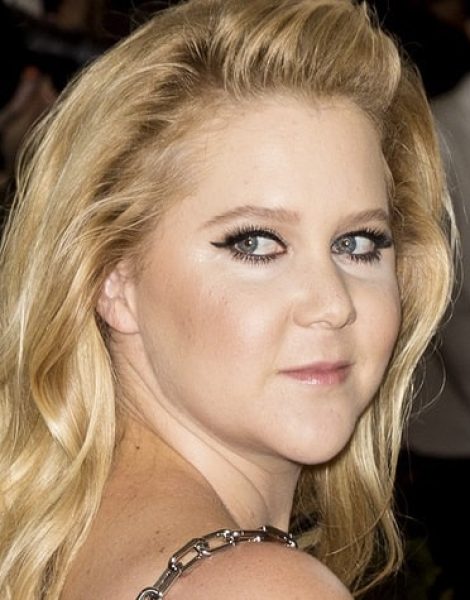 Have you heard about the latest dust up to rock the fashion industry? InStyle magazine had the temerity to put Amy Schumer—in a white swimsuit no less—on the cover of their beauty issue.

And the kicker is…it’s a beautiful photo. The colors, the lighting, the makeup, the whole shebang, it’s stunning. In fact, they’ve released additional photos from the shoot, and in my opinion, those are also beautiful.

“What’s good about not being a model is that it’s not the thing I trade on. Once I start looking older, that won’t affect me. I have never gotten anything done because I’m, like, so gorgeous. I’m good-looking enough that I can work in the business. I get enough attention from men that I feel good. I see pictures of myself now, and I look younger than I think of myself. It hasn’t scared me yet.” @JessSeinfeld interviewed @AmySchumer for our May cover and the results are powerful and, as expected, hilarious. Click the link in our bio for the full story. ✨ | ?: @carterbedloesmith; Fashion Editor: @cristinaehrlich; Hair: @kimmykuppkakes; Makeup: @andrea_tiller; Manicure: @caseynails; Pop Styling: Lynn Nigro; Production: First Light Productions

It goes without saying, but I’ll say it anyway, that we all will have, and are entitled to, our own opinions on what is beautiful or even attractive. Every photo of every woman will have haters based on their own personal aesthetics. It may be valid, but so basic that it is a silly argument to have, isn’t it?

Except not everyone thinks so. In particular, Dana Duggan, the owner of luxury South Shore Swimwear was offended by the very idea of Ms. Schumer being allowed to grace the cover in any bathing suit. Her graphic and candid reaction to the photo on Instagram turned into a frenzy of users who called her out for body-shaming.

One of Dana Duggan’s later comments spoke of how Amy Schumer makes jokes about her own weight, and all the yucky bits about herself and her womanhood. Some of the other detractors of InStyle’s photo picked on Ms. Schumer’s brand of comedy, which is fairly vulgar, as a reason she shouldn’t be on the cover of a beauty issue. They think she’s an ugly person, and they don’t agree with her, so they threw out vomit emojis and GIFs in protest. Ok, solid point of view, but I’m going to question your need to vocalize your opinion in such a hateful way.

I’m not always a fan of Amy Schumer’s jokes, but she’s an attractive lady who appears to have a fairly healthy body, who clearly has a decent body image. Like the vast majority of her gender, she talks about her own weight in a self-deprecating way. For the last thirty or so years I have made the same lame joke whenever anyone asks me where I am from: “I was born in California, but you probably guessed that because I’m a tall leggy blonde.” What’s funny is I’m actually a short thick brunette. I was barely hitting puberty when the irony of my being a “California Girl” first hit me, and every time I make the joke it says a whole lot more about me than simply stating where I lived as a baby.

Speaking later to Yahoo Style, Ms. Duggan explained “she feels modeling used to be ‘something you aspired to and didn’t see on the street.’” Referencing media’s move toward body positivity and inclusivity, she added, “Now everyone wants their kid to be a model.” This was her justification for saying that not only did InStyle choose the wrong woman to put in a bathing suit, but that any woman over a particular spec shouldn’t be allowed to wear feminine swimwear. As it turns out, South Shore Swimwear line doesn’t sell “plus size” suits, and although she says she’s a size 14, Ms. Duggan suggests larger women should wear rash guards when in public.

I’m not going to make any assumptions about Ms. Duggan, but as a size 14/16 gal myself, when I read those statements I just wanted to give her a hug. Bless her heart. She feels the fashion and beauty industry has lost its glamour, the elusive and exclusive fantasy element that so many women love.

You know what else women love? Seeing a variety of women walking on the runways, in magazines, portrayed on TV shows and in movies. All sizes do exist, all colors, all the everything. That’s reality folks, and we here at #RealityMoms happily celebrate all women, because ALL women are REAL women.

This isn’t a question of whether we think Amy Schumer is hot enough or beautiful enough. We aren’t suggesting you have to like it, or her, or the magazine.

Just respect that the editorial team of InStyle picked her and she felt confident and rocked that suit.

That is a beautiful thing.

Serendipity Indigo is the self-proclaimed Queen of Silver Linings. She frequently writes about the struggle to find the bright side on her blog Mother of Serendipity. Although raised a military brat, she's called New York City home for the last 16 years. Now a wife & stay at home mother to her two young Rebels she can be found ranting, raving, looking for unexpected treasures, and committing random acts of photography. Most of this randomness is shared on her Facebook, Twitter, Instagram, Pinterest, and whatever other social medias the kids are into these days.
All Posts
PrevPreviousRainy Day Activities With Kids on #Fox29 Philly
Next7 Great Non-Candy Easter Basket IdeasNext