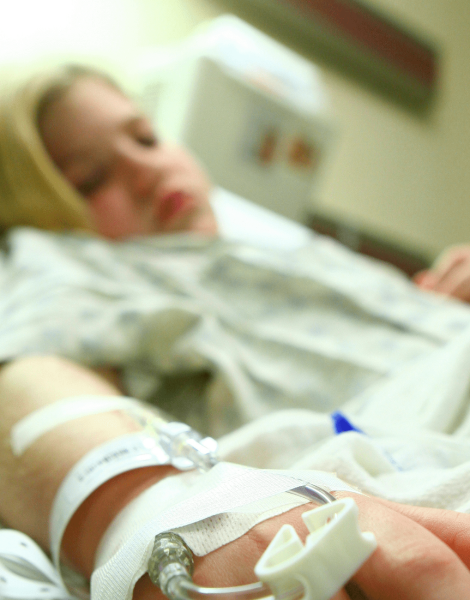 Parenting a child with a special need means learning how to separate fear from love; they are so intimately bound together in a parent’s heart. Every single day is born with hope for ease of pain or illness while dread tiptoes closely behind that hope, reminding one that health is a fragile state that can be knocked away in seconds.

Like any other mother, I often found myself saying, “I just want a healthy baby,” during my first pregnancy. Everything about my pregnancy was average and expected. It never occurred to me that the word “healthy” would take on such an urgent and painful meaning for my husband and me.

After 21½ hours of effort, I gave birth to my first son. Being a newborn, he underwent the usual routine of tests, which included the heel stick to screen for 35 different metabolic disorders.

His foot, the one that nurses poked in order to dab away enough blood for a sample, bled for three days.

Many questions were asked. Many tests were given. At three days old, my son was administered a full blood transfusion. I overheard a nurse quietly talking about the need to make sure that my child be given an HIV/AIDS test soon. While adjusting my ability to function while in a constant state of internal panic, his foot stopped bleeding.

He was moved to the NICU where he would stay for a month.

It wouldn’t take long before we would learn that our son was diagnosed with a rare bleeding disorder called hemophilia. We asked a lot of questions. We cried a lot of tears.

We gulped immense sighs of relief mixed with anxiety, and then we cried again.

One week after bringing our newborn home, we saw his wrist swell up at an alarming speed. He began to wail that vibrating cry that newborns have. We raced to the hospital where we were told he was having a joint bleed in his wrist.

But from what?! How?! Can he just start bleeding?!

Yes, they said, he can just start bleeding.

During his toddler years, we padded our house, we gated off nearly every room, we fitted our son with padded knees and elbows, a helmet, and we didn’t let anyone touch him.

I became a lonely stay-at-home mom. My only friends were other mothers on the internet. I was terrified to take my child to a park or have playdates. I refused to make an effort at a social life out of fear and guilt. Everything became about hemophilia. Hemophilia was so consuming that it began to feel like a thick fog of sadness as we mourned the loss of expectations of normalcy.

When our son began to run and jump and play, like any boy would want to, he began to have bruises appear—seemingly out of thin air—all over his arms and legs. Sometimes we would be kicking a ball in the grass, and he would just sit down. He couldn’t walk anymore because his hips were bleeding, or his ankles were bleeding, or his knees were bleeding. We kept an emergency bag fully packed by the front door for these moments so that we could race to the ER and have him treated.

For years, he had to be treated in the hospital. Doctors told us that this was a safety precaution because it would take us a long time to recognize a bleed, and to some degree, they were right.

Unfortunately, our hospital is a learning hospital and nurses who were not adept at blood draws on children would prick and poke and practice on my son.

On one particularly cruel evening, we spent eight hours in the hospital while several nurses tried more than sixteen times, blowing out all of his veins, and still not getting the medicine in. He screamed out in pain as his knee continued to swell. It took three adults to hold him down. A wise doctor came in and seeing the calamity immediately called Life Flight. Two men appeared and simultaneously calmed my son and treated him in under a minute.

When I could see that my son was OK and in good hands, I excused myself to the bathroom where I threw up.

When my son turned four, he underwent a scary surgery to implant a portacath in an artery next to his heart. A team of highly skilled nurses (some of whom are now our personal friends) trained us to administer his medicine at home. We give him his treatments in the quiet safety of our own home now.

This past fall our son entered kindergarten. It took months of preparation to ensure his safety. We met with teachers and staff at the school in order to coordinate with our son’s medical team so to put a comprehensive medical response plan in place for everything from a loose tooth to a broken arm.

On his first day of school, I held my breath for nearly eight hours while I waited for the phone to ring, but it never did. He came home and told me that he was in love with a girl named Chloe. He told me that his new best friend was named Franklin. He said he doesn’t want to be a scientist anymore but now wants to be a ninja.

And just like that, I saw my son having the experience of normalcy. Hemophilia was not the topic at hand, but rather girls and silly putty, spelling and ninjas. As the months pass into winter and we begin to plan out the New Year, I finally find myself worrying about regular boyhood things.

Having a network of people in my family and in my community who are keenly aware of my son’s genetic disorder and how to deal with it helps to lessen the burden on my heart. I am finally able to shove hemophilia behind other concerns so that we can focus on the usual adventures of childhood.

Learning how fear is useful and how to control it allowed me to embrace love and hope so that I could come to terms with my child’s genetic condition.

Any parent has to learn this lesson, but parents with children who have serious medical problems from life-threatening allergies to rare genetic disorders, childhood cancer to celiac disease, and autism to asthma understand that the confrontation to keep fear from enveloping their ability to love without sadness is constant.

This post originally appeared on ScaryMommy. It has been reprinted with permission.

Sarah Cottrell is a staff writer for ScaryMommy. You can follow Sarah Cottrell on Facebook where you can keep up with the fun! As a Maine-based writer, Sarah is the voice behind Housewife Plus at the Bangor Daily News and is a regular contributor to Scary Mommy. She is a co-author in several books including I Still Just Want To Pee Alone from the New York Times Bestselling series.

This #RealityMom or #RealityDad has graciously agreed to share her word baby with our site and we are eternally grateful.
All Posts
PrevPreviousMommy, It’s Your Turn
NextI’ve Dropped the WeightNext