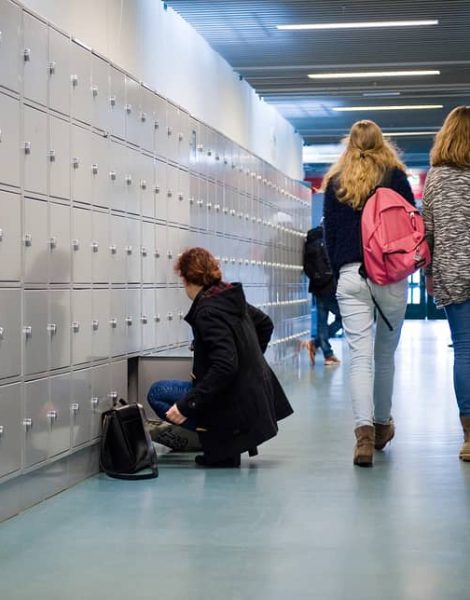 Recently my daughter forgot her gym clothes. I know. Tweens and their irresponsibility.

Except, she mentioned all weekend that she needed to do her laundry. She’s 12 and part of her household chores is managing the washing, drying, folding and putting away of her clothing.

She mentioned it a few times, and in each instance I replied: “Okay, no problem. You can do it as soon as I switch my stuff out.”

“No, no. I want to make sure everything is dry, so just wait,” I said nonchalantly about four times over the weekend as I washed most of our family’s winter apparel, some to get ready for us, some to give away to a winter clothing drive.

After a busy weekend, just as I was headed up to bed, I saw her laundry basket sitting to the side of our washer. It never was done.

I quickly tossed it in the machine and went to bed, reminding myself to put it in the dryer first thing in the morning. Funny, right? I’m guessing you know what happened next.

At 7:18 a.m., my daughter started freaking out that she couldn’t find her gym uniform. “I figured I would just bring it home again tonight to wash, and now I can’t find it,” she cried.

Mom fail on so many levels. “Go catch the bus. I’m sorry, honey. It was my fault. I’ll drop it off in the office. You have to remember to go pick it up before gym, though, or you’ll have to borrow one,” I called out from upstairs.

At 8:10 a.m., I drove to her school to drop it off. As I walked in with my little plastic grocery bag of gym clothes, I saw a familiar mom walking out of the building.

“Did someone forget something?” she asked.

“You’re a better mom than I am. My kids know now that if they forget something, they’re screwed. You got to teach them responsibility! See you later,” and she was gone.

Somehow, I felt guilty about bringing in the gym clothes. I didn’t like the way she perceived my parenting and I felt defensive. I wanted to shout, “Wait, it was my fault! She was responsible! I’m not!”

When I entered the school, I found myself word vomiting to the secretary. “She didn’t forget it. It was really my fault because I never let her use the washer and dryer this weekend and then she actually remembered it this morning but I forgot to put it in the dryer because I was tired so I told her she has to pick it up from the office and not disturb class and she’s really so much better about remembering things then she used to be and sorry to bother you, ” I spouted without taking a breath.

When I finally stopped, the nice secretary calmly stated: “We all forget stuff every once in a while, kids and parents alike. Do you know what class she’s in? I’d like to drop it off to her.”

No judgment. No advice. Just help for a kid whose mom messed up.

One of the things I do not like about raising kids in today’s social media age are the extremes portrayed about parenting. Take your kids something they forgot, you are not teaching them responsibility. Help with homework, you are a Tiger Mom. Go overboard on a school project, you’re doing it to make yourself look good. Sign your kid up for too many activities, you’re going to stress them out. And don’t ever use Pinterest.

We forget that parenting is the most personal and individualized thing we will ever do in this world.

I hate that I let that other mom’s comments get under my skin, hate that I became defensive. It was an innocuous conversation, just parking lot banter based on limited information.

But we have become so sensitive to judgment that it skews every decision.

Recently I’ve seen a trend of blaming things on the “Participation Trophy Generation.” I get it. My kids received the equivalent of their weight of trophies, medals and ribbons for the various activities they participated in over the years. Some were earned, like at a tournament or competition, and some were merely for putting in the effort and finishing the season. In our house, I don’t think they feel strongly about receiving it for competition or participation. I think they just like having a memory of the experience.

A friend, however, recently emailed me a story about her son who is eight. According to her, he is uncoordinated, shy, and a target for bullies. As an athlete herself, she tries to encourage him to compete in some activities, whether it is a sport or a Minecraft contest. Apparently he excels at chess, and is killing it at various events winning several competitions the past few months. Funny enough, though, it is the participation trophy he received for finishing the soccer season that he is the most proud and that sits on top of his desk.

“I know I’m good at chess, Chess is easy, but I wanted to quit soccer after the first practice. I hated it. I don’t think I want to do it again, but I’m proud of myself for finishing. And not dying on the field,” he told his mom.

The trophy that we all think makes our kids soft meant something to this boy. It gave him a greater sense of accomplishment than winning.

I think we want to pigeon-hole all the things that are wrong in this world on the decisions of someone else, usually a parent. And while sometimes it may be accurate, oftentimes, it’s just a rash judgment on something you know little or nothing about.

As parents, we can continue to egregiously cast a judgment net, or we can spend that time and energy crafting little humans that will do great things in this world. What works for you may not work for me.

Or perhaps, maybe you are just more responsible about doing your laundry than I am.

This post originally appeared on Playdates on Fridays. It has been used with permission.

Whitney Fleming is a marketing consultant, freelance writer and mom to three tween girls. She blogs about parenting, relationships and w(h)ine on her blog, Playdates on Fridays, where she talks about serious stuff, without taking herself too seriously. In her free time, she tries to dispel the rumor that she is a typical suburban mom despite the fact that she is often seen driving her minivan to soccer practices and PTA meetings. Go visit her site at Playdates on Fridays or find her on Facebook or Twitter.
All Posts
PrevPreviousThirty Things I’ve Learned in my Thirties
NextA New Season of Parenting: Moving to CollegeNext