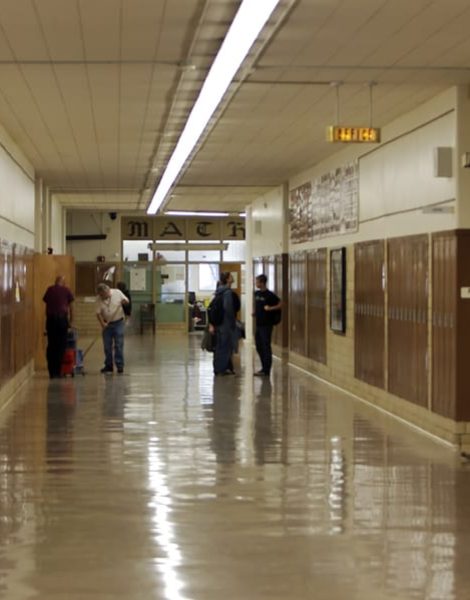 The Call No Parent Wants: There’s a Gun at School

When the phone rang, my first reaction was to ignore it. I was finally making progress on a work project after an otherwise slow day and didn’t want to lose momentum.

The ring persisted, slicing through the midday silence and demanding attention. I glanced at the phone.

It was from my daughter’s school.

I thought that was a bit odd, given the time of day. School would be letting out soon, and I couldn’t think of a reason for a call now.

“I hope she’s not in trouble,” I thought as I answered.

At the other end of the line, I heard the principal’s measured voice on a recorded message. The district frequently uses robocalls so I relaxed a bit knowing that it wasn’t a call specifically about her.

Then I heard the word no parent ever wants to hear on a call from school.

When I heard the principal say that word, my world suddenly shifted into slow motion. My breath caught in my throat as my heart sank.

A student brought a gun to my daughter’s school the day after the nation’s largest mass shooting in modern times.

Turns out that the gun was unloaded. The school explained the incident with the following statement:

[A] teacher reported a student acting suspiciously and contacted the student’s dean, who removed the student from the classroom. Through the dean’s interaction with the student, he discovered an unloaded handgun.  Upon the discovery of the handgun the dean notified the School Resource Officer, who is a Police Officer.  Together school administration and  PD collaborated and worked quickly to determine the school was safe and instruction continued as normal.

My girl was fine. Everyone was fine.

Then I texted my daughter, “I know you’re fine and busy, but I’d love to hear from you that you’re okay. I love you.”

She responded, “What happened?”

Most teen response ever, right?

Turns out, she had no idea what had happened. The school had contained the situation without a lockdown. When they said instruction continued as normal, they meant it. I figured that there had been some disruption, but no.

Her classmates all got texts from their moms within seconds of each other and were trying to piece together the bits of info they offered to figure out why.

The question of “Why?” is one that was on my mind as well.

Why would a teen bring a gun to school?

Why are we okay with this happening?

Why aren’t we doing anything as a country about guns?

I consider schools to be safe and even sacred spaces. Violating that is unacceptable, and I was outraged.

I know that the gun wasn’t loaded, but what if it had been? And what if a student had brandished it at others who didn’t know that it was unloaded?

I have other “What if” questions on my mind.

What if we decided to do something?

What if we all called our lawmakers and said enough?

What if we took a stand?

When my daughter got home from school, I hugged her longer than she would like and then we talked. We talked about how she was feeling, what questions she had, and what to do in the event of an actual active shooter scenario. My heart felt a little more broken than it already was.

Then, I headed to a vigil organized by the local branch of Moms Demand Action for Gun Sense in America to honor the lives lost in Las Vegas and to call for reform  to prevent additional gun violence. Next, I sent messages to my elected officials letting them know exactly how I feel.

I wanted to channel my outrage into action. I want my daughter to see that I did something.

I know that it’s far from enough and my actions are not about changing other people’s minds, which I said earlier this week seems impossible.  But sitting on my couch, feeling angry and helpless wasn’t doing anything. My attendance yesterday was about making my voice heard and trying to be the change.

So, this morning I sent my daughter off to school with reassurances that she’s in good hands. I reminded her that there’s more good in the world than there is bad, and I asked her to be the good.

I silently said a prayer as I waved goodbye.

I sent a thank you note to the principal and asked him to pass along my gratitude to the observant, fast-acting teacher and dean involved in yesterday’s incident. I wrote this, and now I’m off to research how I can make my daughter’s school and the world I send her out into safe from fun violence, like the other developed nations in the world are.

This post originally appeared on Chicago Now. It has been reprinted with permission.

Shannan lives in the suburbs of Chicago with her husband and teen daughter. She's a recovery attorney who now blogs at BetweenUsParents.com, ChicagoNow, and as part of the Chicago Parent Blogger Network. Her writing has appeared on the Erma Bombeck Writers' Workshop, Scary Mommy, BonBon Break, Brain Child and In the Powder Room, and her essays have been included in two anthologies by The HerStories Project. She is also freelance writer for regional magazines. Shannan was in the 2013 cast of Listen to Your Mother, despite the fact that her daughter often fails to do so.
All Posts
PrevPreviousWhen I Finally Realized I Had It All
NextI’ve Got a Case of the Mommy MondaysNext