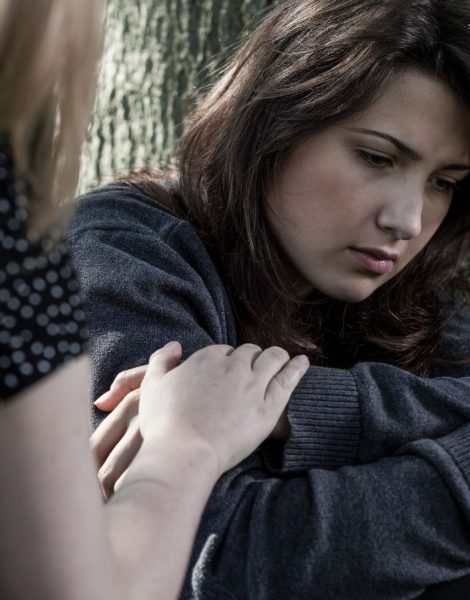 The kids finally had their baths and were watching a movie. The craziness of the day was settling down. I knew this would be the best time to call Jill.

It was 7:30 on a school night, surely she would be home. I missed speaking with her. Aside from a few brief conversations that amounted to little more than “hello,” “life is crazy right now,” or “I’ll call you back,” we hadn’t had a real conversation in about six months.

After eight years of friendship, I was confident in our relationship, but worried about her. She was going through a tough time after her dad was diagnosed with cancer. She had also taken on a full caseload as a speech therapist now that her youngest was in school full time.

Our relationship was formed on the playground of new motherhood. We met when our first children were babies. We had seen each other through potty training, sleep deprivation, second and third babies, the toddler years, first days of kindergarten, speech and learning delays, trips to the ER, and moves to new, bigger homes.

We could spend hours on the phone talking about the latest TV show, political scandal, or parenting problem, usually while we cleaned a floor or cooked dinner.

Husbands, parents, siblings, and children could drive us crazy at times, but we had each other to vent to and laugh with.

As the years went by and our kids got older, our lives morphed into the craziness of moms with school-age children complete with set schedules and tons of activities. The days of leisurely chats on the phone while we cleaned our kitchens, or the visits where she would come in the morning and leave after dinner had ended.

It would have been easy for me to let the friendship just slip into a yearly date on our birthdays and maybe a Christmas card. That was my typical MO with old girlfriends.

Jill knew this of me and the few times we had managed to speak over the last few months, she had specifically asked me to hang in there with her.

I was looking forward to hearing her voice and hoping that we could finally catch up with each other.

“Great, busy as always, but great. How’s everyone by you?”

“Great. Is Jill around?”

“No. She’s out with some friends.”

“Oh, that’s great. I’m glad she’s getting a chance to go out. How is she doing?”

All of a sudden a charge went through my body. My heart sank, and I felt as if I was going to throw up.

Something about the way Dave said Jill was doing well let me know that all my unreturned phone calls, the quick greetings, and the explanations that she had to run but would call me right back, had nothing to do with her increased hours at work, her dad, or anything else.

I felt like the biggest fool in the history of fools. Sort of like the wife who thinks she is happily married only to find out her husband has been cheating on her. And everyone knew before she did.

I said a half-hearted goodbye and a quick, “great, let her know I called,” and hung up the phone.

I felt sick and deeply hurt. I was also confused.

Jill and I could talk about anything. Or at least I thought we could.

We had both made frantic calls at all hours of the day and night to each other when we needed someone to listen to our fears about our kids or to complain about our husbands.

We went to each others’ kids’ birthday parties, christenings, and communions. I knew her brothers, parents, and childhood friends. We had even spoken about naming each other as the guardians for our kids.

If she didn’t want to continue our friendship, why didn’t she tell me or just let it die a natural death? I could live with that.

She was the one who asked me on more than one occasion to keep calling and not give up on her.

We didn’t have a fight. Not even a heated argument.

I wondered what I did to hurt her, but I was at a total loss as to what it was.

I went through everything I could have possibly done wrong. I talked too much. I was too self-involved. My life was too crazy. I was too needy.

The next day I expected to hear from Jill.

A few days later I called and left a message apologizing for anything I had done that hurt her. I also thanked her for all the support she’d given me throughout the years.

And that was that. I never heard from her again. That was ten years ago.

It took a while for the wound to heal. Perhaps because I had to talk about it in order to move on, but I was so embarrassed to admit what happened.

Who gets dumped by a friend? I mean really, really dumped. Isn’t that type of breakup reserved for romantic relationships?

The funny thing is, the more I started to open up about it, the more I learned that I wasn’t alone. Almost everyone I told had a similar story in their past. I wasn’t the only woman who had her heart broken by a platonic friend.

The hardest thing to accept, even after so much time, is that I hurt someone I cared about and never had a chance to make amends. Though, I can now look back on our relationship without feeling sad, or ashamed at the way it ended.

Jill was present for so many of my children’s firsts and was there for me at a time when I really needed a trusted friend. And for that I will always be grateful.

This piece originally appeared on My Dishwasher’s Possessed. It has been reprinted with permission.

This #RealityMom or #RealityDad has graciously agreed to share her word baby with our site and we are eternally grateful.
All Posts
PrevPreviousI’ll Keep Watching
NextHow to Parent When You Have Hearing LossNext