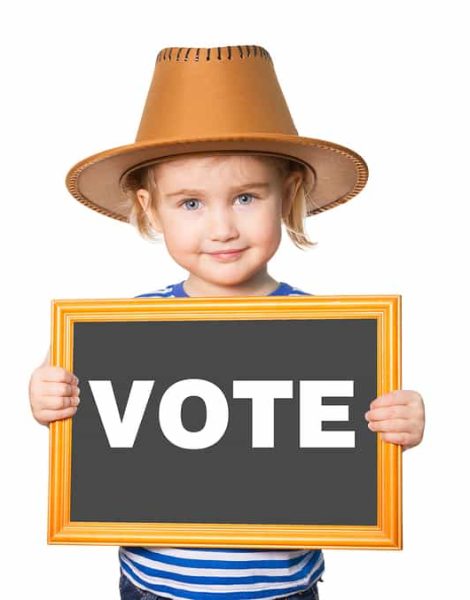 Get Out and Vote!

I recently spent time in Australia, where it is COMPULSORY to vote in national elections. If you don’t vote, they send you a ticket with a fine.

On one level, compulsory voting seems undemocratic. Who has the right to MAKE you show up at the polls??? We Americans don’t like the government to make us do anything specific. We like our autonomy.

But on another level, what the heck is going on with the 40% of Americans who don’t vote?

There might be some really good reasons not to vote, but not being organized enough to get around to voting doesn’t fly. If you just “never seem to have time” to get registered or make it to the polls, then I offer these tips, before it’s too late:

Get registered to vote now. According to RocktheVote.com, voter registration takes an average of two minutes or less. I’ll even sacrifice you reading the rest of my (amazing) article here, if you need those two minutes back. Click now and go register to vote.

Get your kids into the act. I take my kids to the polls with me. But if you just can’t see yourself doing that, call me. I have made this offer before, and I am dead serious…I will watch your kids while you go to the polls, if that’s what it takes.

Decide on a candidate and platform which matches your values. Do your own homework. PLEASE don’t just listen to commentary. Listen to the candidates themselves. If you didn’t watch the presidential debates, do it. I would provide a link, but I’d rather you not be swayed by unintentional affiliations. Just go to YouTube and search for “presidential debate 9-26-2016“. You will find lots of full replays. After you watch the debates (and none of the spin), go to both candidates’ websites, read a few articles on topics that are important to you, and dive deep into what their platform really is (not what others say it is). Then ask yourself these questions:

If you really can’t make it to the polls, then vote in advance. Perhaps you have to travel for work that day, or you are subject to unpredictable bouts of debilitating sickness. Vote.org has you covered with an easy way to get your absentee ballot, and they say it takes two minutes or less.

Don’t throw away your vote. Don’t write in the celebrity of the moment. Don’t sit this one out because you dislike all options. And yes, in my opinion, don’t vote for a minor party candidate, because that amounts to squandering your voice. Take a stand, using the steps outlined above. No one person and no situation is perfect. This is an unusual election cycle, and we need all the smart people (that includes you!) helping to make the best choice for our entire community that we call a country.

My family lives very near to a national park where the women’s suffrage movement is commemorated in a Liberty Bell replica, called the Justice Bell, which traveled the nation until August 18, 1920, when the nineteenth Amendment was finally ratified. It’s only been three or four short generations since the time when women did not have a voice. My own grandmother was born into that world, when women were not allowed to vote.

Imagine if you were not allowed to vote this year. Would that change your desire to vote?

Would that change your view of taking your kids to the polls to see you vote?

Would that change your willingness to organize your day to cast your ballot for the next US president?

This post originally appeared on HeartWork Organizing. It has been reprinted with permission.

Darla DeMorrow is a certified professional organizer (CPO®), decorator, personal photo organizer, speaker, and owner of HeartWork Organizing, LLC, based in Wayne, PA. After twenty years in corporate and small businesses, she is having more fun by combining two loves, making homes more beautiful and meeting interesting people… because boring people don’t need organizing. With two active kids, and a busy blog, she’s perfecting the art of “good enough” if it leads to a full night of sleep. You can find her blog at HeartWork Organizing, as well as on Twitter and Facebook.

This #RealityMom or #RealityDad has graciously agreed to share her word baby with our site and we are eternally grateful.
All Posts
PrevPreviousDiscrimination: My Son Can Hear You
NextMyRxProfile App – Your New Best FriendNext