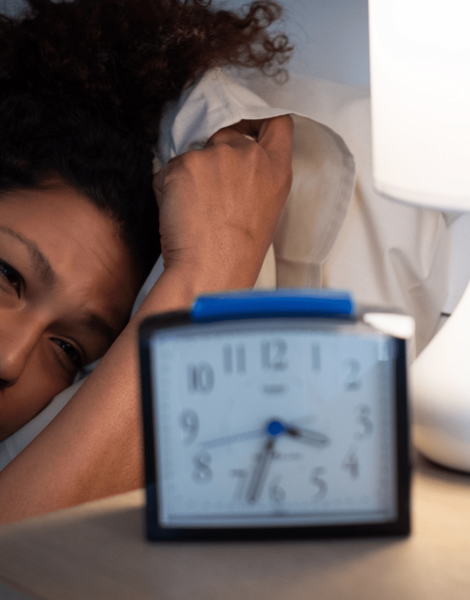 Last night there was no sleep to be had; I simply could not shut my mind up. You know that feeling when you wake up like a shot, mind alert, heart pounding? It’s not unusual for me, but it is annoying and all encompassing. It’s anxiety.

The whirring of your brain, the endless berating thoughts, the scanning of all I did or said that day. Was that ok? Did I do anything stupid? Oh my god, how could I have done, said, thought, written that? A never-ending loop, whipping around in my head, winding me up faster and faster like a spinning top.

Anxiety is tough. It’s a term used very loosely and it’s not often that people acknowledge just how debilitating it is. And it means different things to different people. To be clear, anxiety is not just feeling nervous before you take a test, or talk on the phone or go into a party by yourself. It’s not those nerves before you stand up to present. It’s constantly having excessive worry or fear strong enough to interfere with your daily life. It’s when you freak out over the length of time it takes someone to reply to your text, nervously going over all you might have done or said wrong. It’s checking and rechecking your work; whether the door is locked; or if your bed is clean. It’s wanting to go to a party and have fun but knowing your anxiety won’t let you; so you stay home. But then you worry what people are thinking or saying about why you aren’t at the party.

Staying home isn’t the best answer; you can’t just sit on the sidelines watching life from a safe distance. So, I’m gathering other skills and habits that work for me so that I can go to that party, so that I can get some sleep. Especially the sleep.

I’ve had trouble sleeping all of my life. When I was a little kid it was hard for me to fall asleep. So I started rolling and rocking back and forth on my bed, fists clenched so if there was a “bad man” after me, I would punch him, even if I were asleep. It turns out that rocking and swaying is a great calming mechanism for kids. I was just a little ahead of my time!

Later, in college I used to listen to classical or piano music—George Winston usually—and I could drift off to that. I still do that sometimes; the soothing notes roll over me and help me relax. Recently, with all the talk about mindfulness, I’ve been trying different techniques like, you know, breathing. OK, it’s not exactly new, in fact, it’s been used for centuries in yoga and Buddhism; but it does help.

Let’s try it: deep breath in through the belly to the count of four, hold for a count or two and breathe out through your mouth to the count of four again. Repeat this four times. Controlled breathing, like what you just practiced, reduces stress, increases alertness and boost your immune system. Science is providing evidence that the benefits of this ancient practice are real. Studies have found, for example, that breathing practices can help reduce symptoms associated with anxiety, insomnia, post-traumatic stress disorder, depression and attention deficit disorder. In simple terms when you breathe deeply, your nervous system—which controls unconscious processes such as heart rate, digestion and the body’s stress response—calms down and slows everything down.

Another technique I learned recently was to take a moment to pick out few things I can see, hear, smell and feel. This grounds me, it makes me focus on the here and now—not the “what ifs”. For instance, if I’m outside, I can notice the chirping birds, the colors of flowers or the sound of the wind. It forces me to take a pause, distracts me from whatever my brain has been gnawing on and then I can focus back on my breath. If I am busy noticing things around me, I can’t also stress out at the same time.

At night, another trick that helps is listening to something steady—rain, a white noise or my husband’s heartbeat—and tuning in to it consciously. When stressful thoughts drift into my head, I try to acknowledge them for what they are and then move on, divert myself back to the steady sound of his heartbeat. Other times, I just stretch my foot out to touch his, another way of grounding and soothing me. If he’s not there or if that doesn’t work, I have been known to focus on my dog’s breathing or if he’s on the foot of my bed feeling the warmth of him on my feet.

But last night, none of that helped

But, last night none of those helped me. What finally did the trick was something my parents taught me a million years ago. I ran my finger up and down my arm. That’s all. I simply traced my finger along my hand and slowly up my arm, towards the elbow, feeling the tingles. In mindfulness it’s sometimes called the Car Wash an is a type of sensory meditation often used on children if they are anxious or riled up.

It works: I closed my eyes, focused on the sensations, and drifted off to sleep.

Dana Baker is a writer, a not-so-perfect mom of two and a Parent and Teen Coach. Founder of Parenting In Real Life, Dana knows first hand the challenges of raising a child with anxiety as well as ADHD and some depression. She understands the ups, the downs and the downright uglies and offers a reality check and a dose of good humor in her advice from the trenches. Dana has been featured in RealityMoms, Grown & Flown, Parent.com, Thrive Global, and ADDitude. You can find more about Dana on Parenting in Real Life.
All Posts
PrevPreviousI Swear, It Really Works
NextDear Sports Bras: Learn a Little Modesty PleaseNext