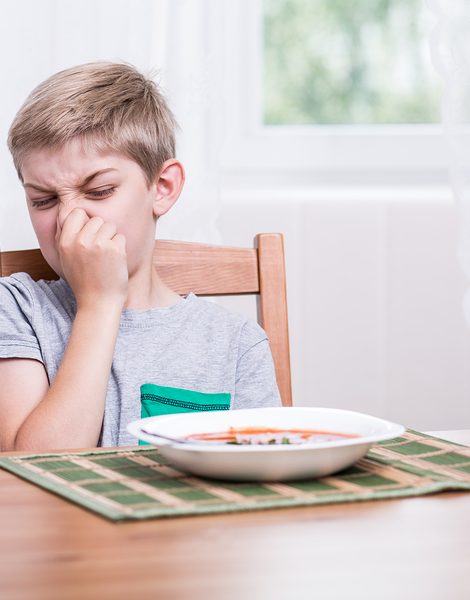 I have a kid with a severely limited diet. He has sensory processing disorder (SPD) and after many years of various therapies to overcome his challenges, he’s mostly a typically weird and weirdly typical kid. Except when it comes to food. His most persistent and consistent sensory obstacle is extreme sensitivity to taste, texture, and smell. The resulting anxiety and fear have wreaked havoc on our family meals for as long as I can remember.

When he was five years old and newly diagnosed with SPD, I told his occupational therapist that I wanted more than anything to conquer his fear of food. I specifically remember saying, “I do not want to be having this conversation when he’s eleven!”

He’s eleven now and on the cusp of puberty, and we have a team of therapists and a nutritionist helping him ingest enough calories to gain weight and height during this crucial time of development. We’re definitely still having this conversation, and I know it will be the elephant in the room for the rest of our lives.

Over the years, I’ve expected, anticipated, and imagined countless scenarios where food would be his kryptonite.

I expected my son to bring lunch to school instead of buying one, and I knew it would be difficult to order from a restaurant menu without a laundry list of edits and substitutions. I anticipated he would skip the pizza at birthday parties and sleepovers, and I imagined sleepaway camp would be a no-go.

And my fears go way beyond mealtime. Will he find love and acceptance? Will he be happy?

What I’m realizing as we navigate this arduous journey is that it’s the surprises that scare me the most.

A few summers ago, my son developed a terrible cold and cough that required antibiotics. It took him three days and a diagnosis of pneumonia to muster up the courage to swallow the medicine. His inability to take it when he was clearly in pain was shocking. It was the first time his health was truly on the line and it was terrifying. What if he ever has to drink barium sulfate for a CT scan? What about when he has to prep for a colonoscopy? His fear of food could kill him and have nothing to do with not eating vegetables.

Last night in the middle of watching a movie, my son blurted out with tears streaming down his face, “Does Skittles love me even though I don’t feed him?”

I was blindsided. Apparently, a friend told him feeding a dog is how they know you love them. He’s tried giving treats to and pouring dog food into our puppy’s food bowl, but the smell causes him to gag and heave.

“Of course he does,” I said. I reminded my son about all the things he does for both of our dogs—walking them, playing with them, and refilling their water bowl. I assured him the dogs’ love for him has nothing to do with food, but his question lingered in the air.

He connected food and love, which is something I ponder, embrace, and fight against every single day as I struggle to feed my child.

After a restless night of sleep, I took the puppy outside to do his business and then put him in my son’s bed where he snuggled up against his legs and fell immediately back to sleep. There was no place else he wanted to be.

I don’t know where we’re headed, and I have way more questions than answers about the future, fear, and food, but there’s one thing I know for sure. Love has everything to do with it.

This post originally appeared on The Runaway Mama. It has been reprinted with permission.

Jennifer Gregory is the writer behind the blog, The Runaway Mama. Her writing has been published on Huffington Post, Scary Mommy, Club Mid, Mamalode, Sammiches and Psych Meds, BonBon Break, BLUNTmoms, and The Good Men Project to name a few, and she has been featured on the TODAY Parents weekly “Best Parenting Posts on Facebook” list. She wouldn’t want to be anywhere else except home raising her two boys, but like the little bunny in Margaret Wise Brown’s classic book, she sometimes wants to run away. Read more at The Runaway Mama, and find her on Facebook and Twitter.

This #RealityMom or #RealityDad has graciously agreed to share her word baby with our site and we are eternally grateful.
All Posts
PrevPrevious3 Tips To Keep Your Sleep Schedule Intact Through the Holidays
NextCommunication is not ConfrontationNext