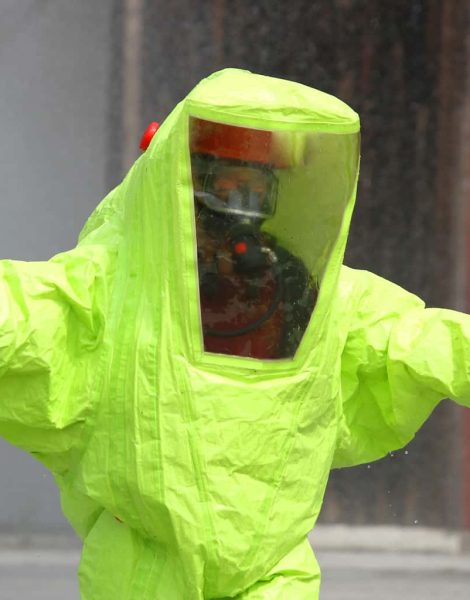 Daycare is Contagious and There is No Vaccine

From the outside, daycare looks like a smiling, happy group of children who spend the day playing and learning, holding hands and singing songs. Those of us who have spent time in the trenches know the real, seedy truth: daycare is a germ-infested environment that would horrify even hazmat-suit-wearing CDC staff.

After enrolling their children, all parents new to daycare go through a spell when it seems that the illness will never end. As your kids build their own immunity, they seem to invent new illnesses, which test your immunity. As you experience wave after wave of the sick, you may worry that the next disease your child comes home with will be Ebola, measles, or the bubonic plague.

Daycare kids are like the rats in London; they slowly spread disease to infect the entire city. They bring home plagues; they infect their families and, by extension, everyone else. I’m not even sure how it happens. Name a disease and I’ll bet you’ll find that Patient Zero was a snot-covered kid in a daycare.

The snot. Oh, the snot! Let’s just take a moment to discuss that …

It comes in three basic forms: a runny yellow or green mess that runs down into his mouth; a large, quivering, almost plastic bubble that pops like a giant pus-filled sore, sending wet drips of it into the air we breathe; or the thick yellow crust that runs from the bottom of his nose to the tip of his upper lip. And seems to chip off and fly away to infect the next kid.

You just can’t get away from it. Kids get sick. They play with their friends and pass on germ after germ after germ. When campaigning for individual water bottles for my first grader, my middle child’s teacher explained that she’s actually seen bubbly snot-covered children lick the fountain.

Let that sink in.

They should have air-locked rooms and require disinfecting showers on entry and exit.

In the first six months since starting daycare, my own toddler has had (in no particular order, and without counting the endless colds and coughs, which never seem to go away):

From the outside, you might suggest that there’s a problem with my daycare. Maybe they don’t have the most up-to-date hygiene practices. The caregivers must not be washing their hands. The surfaces must not be disinfected. Toys must be getting passed with snot-covered little hands from mouth to mouth.

I’ve spent time in there with them, and the hygiene practices at my daycare are worthy of running head-to-head with the cleanest CDC lab in the country. These are some of the cleanest women I’ve ever seen. They wash hands frequently. They have hand sanitizer in every room (out of the kids’ reach). The toys are washed at least once a day. If a kid’s chewing on something, they immediately grab it as soon as it’s put down and put it away for cleaning.

The caregivers don’t want to get sick either; they just can’t get ahead. As they’re wiping down one surface, there’s a kid coming behind them and goobering the last thing they cleaned. The germs are everywhere. It’s like the bugs are genetically programmed to somehow make our little ones touch, wipe, chew, lick or otherwise slime everything to help the germs reproduce, mutate, and spread.

At the heart of it, the problem is the kids. It’s not just that they’re giant germ balls. When they’re most infectious, they not only don’t show any outward signs of disease but they are also so damn cute and vulnerable. They suck you in with their big blue eyes and cover you with snot-covered kisses before you even realize you’ve been slimed.

You can’t win that war, though – even if you have enough money to not work and keep your kids out of daycare, as soon as they hit the school system, the plague will get you. And it’s worse because they didn’t have exposure in daycare.

Daycare is a necessary evil: a germ-breeding, hellish, evil place, but also essential to our ultimate survival. Passing on the germs is making our children strong. And their parents too!

At least I hope so … because I think I’m coming down with something.

Copyright 2014, Live by Surprise as first published on ScaryMommy.  Reprinted with permission.

Liv by Surprise is a pseudonym for a reformed divorcee and single mom – now remarried, co-parenting and working mother of three. She’s been featured on ScaryMommy, HuffPost Divorce, DivorcedMoms.com and Sammiches and PsychMeds. You can find more at http://www.livebysurprise.com or follow her on Twitter or Facebook.

This #RealityMom or #RealityDad has graciously agreed to share her word baby with our site and we are eternally grateful.
All Posts
PrevPreviousWorking Together as Parents
NextA Tale as Old as Time: The Father-Daughter BondNext