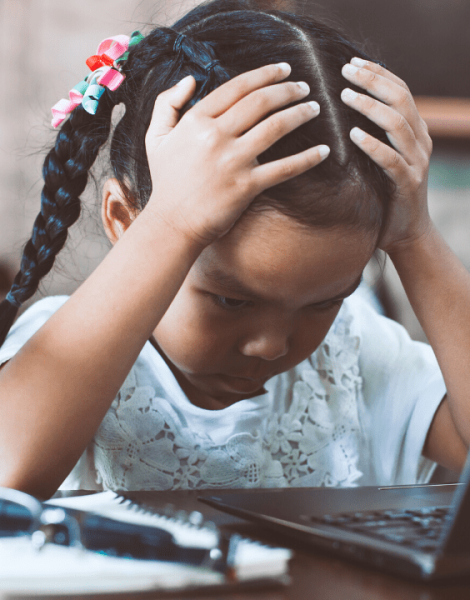 I’ve spent an enormous amount of mental energy forging routes around fear; taking the long way to avoid those scary woods.  It’s an exhausting and isolated path, full of its own obstacles and lacking a GPS signal. My way was studded with compulsion and hidden distress, holding myself responsible for outcomes and creating imaginary control where I had none. I hid it well, which only served to make the road more desolate.

When I see my five-year-old struggling, I worry that one day she too will turn inward and it will be too late to reach through that fog and pull her back out.  Maybe that sounds overly bleak, but that’s what anxiety does best–shows us the worst outcomes, reminds us that we have no control, and dares us to even try.

“Mommy, I’m scared. I had a dream that the fire alarm went off and I didn’t hear it and the house caught on fire and I died.”

There was an alarm all right. It was blaring in my brain as I listened to her recount this nightmare. I have only my own experience, and this sounded too close for comfort. For me it was tornadoes, for her it is fire. And smoke alarms. What might be considered a rational, if preoccupied, fear of fire now extends to the actual implement that that would alert us to danger in the first place. A steamy bathroom sends panic into her voice.  For a while, upon entering a room she would ask me if the windows were too high to jump out of. My baby is imagining jumping out of windows.

She’s a worrier, and the fire is but one example. Maybe this particular fear will burn itself out.  In the meantime, I can reassure her with confidence and planning, but the line between preparedness and reinforcement feels murky. I don’t want to show her the complicated path around the problem, I want to show her how to walk straight through.  But how, when I’m still wandering around the periphery myself?

We tend to raise our kids in hopes that they will be the best of us, following our political and religious leanings, or entering the family business. But with the good comes the bad; there is no checklist to mark off at conception.  She has my crafty spirit, love of all things that sparkle, and maybe my anxiety.  I hope she gets her dad’s musical talent, to offset not being able to find things that are two inches from her nose.

Our children are not us. I have to remind myself of this daily.

They are pieces of us, all mixed up into their own person. Some struggles will feel familiar, and some will be theirs to discover.

My hope is to provide her with the gear to walk into those woods and hike back out the other side. To name and understand this clingy frenemy who tries to protect her, but doesn’t know when to stop. To get that anxiety is not failure, but it’s also not a final destination; not a place to avoid, but not a place to set up camp, either.

This post originally appeared on rhiyaya. It has been reprinted with permission.

Rhiannon Giles is an overwhelmed mother who only occasionally considers giving her children to the circus. She has a sarcasm problem and writes regularly at rhiyaya.com. To keep up with new posts and see some of her favorites, join her on Facebook and Twitter.
PrevPreviousLearning to Work From Home in the Time of Coronavirus
NextHow to Make Every Day Earth DayNext