Having “The Talk” With Your Tween

It had been on my mind for a while, having “THE TALK.” My daughter had just turned nine, and while she showed no signs of it herself, I knew of other kids her age who were DEFINITELY in the throes of puberty. My friend’s daughter was beginning to develop breasts and she wouldn’t wear a training bra because she thought the boys would make fun her. So I asked my friend if she had had “the talk,” and my mortified mom friend cried, “She’s only nine!” “Yes, “I said, “and if she is getting breasts, then her period isn’t far off.” And my friend was like, “I can’t, I just can’t do it. I know I need to, but I can’t.” I wondered, could I?

It wasn’t like I had a lot of great examples. When my grandmother got her period, she thought she was dying of some strange disease.

No one told her what it was till it happened and she didn’t find out what sex was till her wedding night. My mom found out about the birds and bees from her friends on the playground. “It just wasn’t something adults would tell you about,” she said. “We all kind of figured it out for ourselves.” She swore she won’t do that to me and my sisters. So I got the science class.

My mother brought me to her bedroom when I was ten and gave me her version of “the talk.” She covered the egg’s journey from the ovaries, down the tubes, into the womb. She never once mentioned sex. It wasn’t till I was fourteen that I actually understood how the man fit into this science project, and it wasn’t my mom who gave me this info, it was this jerky boy who stuck my hand down his pants! That wasn’t fun!

I was determined to NOT let my fear of having “the talk” affect me! I wanted to give my daughter the talk she deserved to have. The one, I felt completely responsible to give. I had heard somewhere that it helped to break up “the talk” into small mini talks, that having more than one talk was the way to go. So one night, when I was putting my nine-year-old daughter to bed, I started with a simple topic, the training bra. I didn’t want my daughter to be embarrassed about it, like my friend’s daughter had been, so I said to my daughter. “Do you know what a training bra is?” I got an eye roll and a, “Of course, mom, duh!” And then I said, “So you don’t mind wearing one when you need it?” “No, mom! Duh!” Ok!! And with that, I thought I was done.

Then started with the real questions.

I excused myself to get a drink of water. I thought about not going back! But, I was determined to accomplish what I set out to do! I went back in and did my best to explain THAT without getting too graphic.

I nearly fell off the bed. I excused myself for another drink of water. Could I do this? Could I REALLY do this?

I went back in and then, all of the sudden, some strange courage from the deep pit of my belly came over me. If she was going to hear this stuff she was going to hear it from me, and not some kid in her class who wanted her to perform such acts. (Yes, even in 4th grade some kids are doing that, and apparently on the bus, if the rumors are true!!)

So I explained oral sex, in a very scientific way – I think my mother was on to something! And I thought I was done, but then, she kept asking MORE questions! And I kept answering! By the time we were done, there wasn’t much left to talk about, except maybe the Kama Sutra, even I have my limits. I was shocked by how much I had disclosed, but was relieved. Like I said, “At least she heard it from me.”

What I wasn’t prepared for, was the reaction I got from a lot of my mom friends.

“Oh my god, you had the talk already?”

“Well, yes, she’s nine. A lot of girls get their period at nine.”

“Well, isn’t better she heard it from me?”

And from these retorts, I was well, more embarrassed than I had been when I was talking to my daughter. What was all this shame around this topic? Why were these grown women so afraid to talk to their daughters about this??? Had we not progressed any further than my mother’s or grandmother’s generation? I wish I could answer this! I wish I could say I stood up to the shame that was hurled at me. I didn’t. I changed the subject.

What I do know is that at least MY DAUGHTER knows what she needs to know.

She might be the one schooling her friends on the playground, I’ll probably have to answer for that, but that’s ok with me. It certainly beats finding it all out on your wedding night, or having some pimped faced jerk finish a conversation that only a mom was meant to give.

This post originally appeared on MomCoApp. Reprinted with permission. 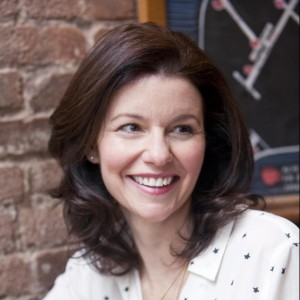 Dina Drew, mother of 2, is a professional actress who has appeared on shows like "Limitless," "Law & Order: SVU," "Blue Bloods," "White Collar" and "Rescue Me;" as well as dozens of TV commercials. She is also a writer/blogger/ photographer/producer/meme maker and frequent contributor to MomCaveTV.com and RealityMoms. Her writing has also been featured on Sammiches & Psych Meds. To learn more about her visit DinaDrew

The Duchess of Cambridge Not ...